More than 300 people - including two MPs and politicians of all main parties - filled the nave of Southwark Cathedral on Monday afternoon to say farewell to Anne Worsley. 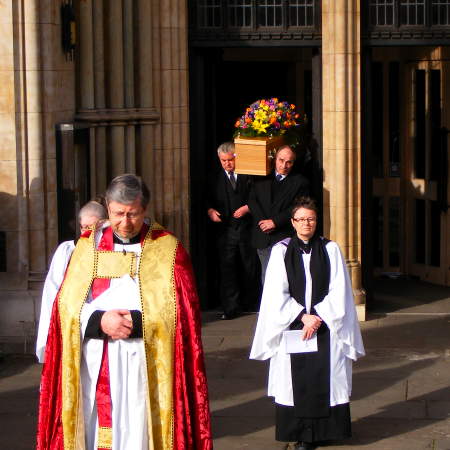 The former Labour councillor died two weeks ago following a sudden stroke. She had been taken ill at the conclusion of a meeting of the Borough Music School which she founded to help local children.

"Anne's death came as a shock to the whole community," said Canon Bruce Saunders as he welcomed the congregation.

"Her Christian faith and her vision of what the world was created to be were among the factors that gave her life so much impatient and purposeful energy."

Anne's younger sister Frances recalled their childhood together with Anne playing the piano and reading widely. Frances revealed how much in recent times Anne had enjoyed breaks walking with her in the Derbyshire countryside.

Referring to her sister's three-and-a-half decades in SE1, Frances said: "I am so proud of what she has done here."

Delivering the second tribute, Simon Hughes MP said to the family: "How grateful we are that, for more more than half her life, Anne served us here in so many different ways reflected by the different people and professions and backgrounds that are around you here.

"There is no doubt that at the end of her life she left many individuals as well as many organisations enhanced by her relationship with them."

Recalling watching Anne at the last Borough Music School concert in the Welsh Chapel, he said: "I could see her skills being deployed – she was encouraging, she was challenging, she was enthusing and she was supporting – but she was absolutely determined that these young people would go on and make the most of the learning they had and benefit from the rigour. I hope that the tribute from all of us will be that the Borough Music School goes from strength to strength as her most specific legacy."

Simon Hughes spoke about Anne's time as a teacher at St Saviour's & St Olave's Girls' School and listed the many other local schools and organisations which had benefited from Anne's work, including Cathedral School and Geoffrey Chaucer Technology College.

Christian Bell, churchwarden at St Hugh's where Anne was organist, read Psalm 27 "The Lord is my light and my salvation". Neighbour Anne Pinkney read the account in St John's gospel of Jesus on the first Maundy Thursday giving "a new commandment, that you love one another".

Members of the Borough Music School played Elton John's 'Can you feel the love tonight?' from The Lion King.

Also represented were Blackfriars Settlement where Anne had been chair and a very active supporter and Southwark Playhouse where she was a trustee.

After the service a reception was held at Blackfriars Settlement in Rushworth Street.