'Youth Fight for Jobs' rally in Bermondsey ahead of G20 march

Socialist Party youth activists gathered in St John's Churchyard on Thursday morning for a rally and march to Excel where the G20 summit is being held. 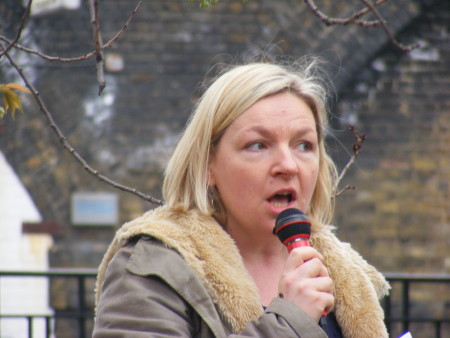 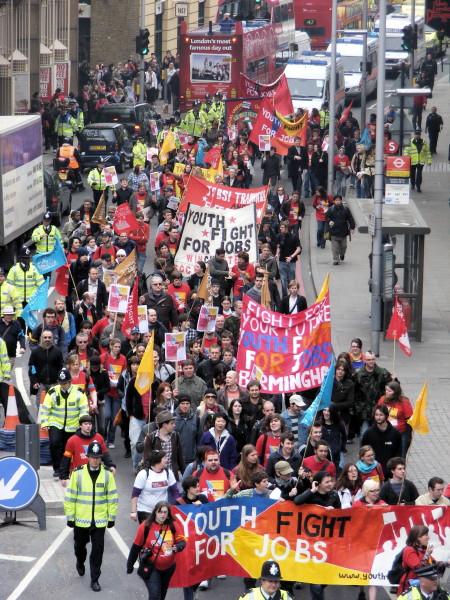 The 'Youth Fight for Jobs' campaign is calling for an £8 living wage, for better pay for apprentices and an end to university tuition fees.

Speakers at the rally in St John's Churchyard included Southwark activist Lois Austin who was the Socialist Party's candidate in Cathedrals ward at the 2006 borough elections.

A minute's silence was kept in memory of the man who died during Wednesday's G20 protests near the Bank of England.

The march moved off along Tooley Street, Duke Street Hill, Borough High Street and Southwark Street before crossing the river at Southwark Bridge.

At London Bridge Walk staff at Richer Sounds rushed to close the shop's shutters as the noisy demo approached.

Pavement tables were hurriedly removed from outside De Gustibus and Hot Munchies in Southwark Street when the protesters came into view.

At Southwark Bridge the marchers received a round of applause from a small gaggle of staff outside the offices of the Health & Safety Executive.

Ambulances from as far afield as the East Midlands and the South Coast were on standby in Tooley Street as the rally got under way.