The Feminist Library is looking for support as well as wishing to continue welcoming visitors. 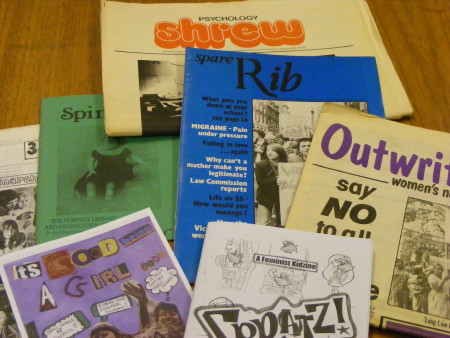 A unique collection of over 10,000 books, 700 sets of magazines and over two thousand pamphlets can be found in the building at St George's Circus.

Although the library holds some original suffragette pamphlets, it is largely devoted to the second-wave materials from late 1960s to 1970s.

The collection has been built up over more than thirty years mainly by volunteers who have had to face a recurring financial crisis.

Despite these difficulties it remains the largest library of contemporary feminist material in the UK.

Much of the material is not available elsewhere but, say supporters, by keeping it together future researchers will be able to have a coherent picture of the women's movement in the second half of the 20th-century.

The library's beginning can be traced back to 1976 when the Women's Research and Resources Centre was formed. Its succession of addresses included one in Clerkenwell next to Spare Rib. The library moved from the Embankment to the present Southwark building following the abolition of the GLC in 1987.

"From just stepping into that special, unique collection of books, periodicals, poetry, pamphlets and much more I could feel every inch of the buzz, history, knowledge and energy that keeps me returning," says Natasha Cock who discovered the library in 2007.

"I feel alive and full of purpose and conviction that I'm working to further a set of issues and movements that I believe in."

Supporter Sarah O'Mahoney, who was a librarian, describes the library as "an amazing fiction and non-fiction collection with every key feminist book you could think of".

In 2006 the Feminist Library was instrumental in seeing that the Women's Health Library was saved from being disposed of at a rubbish tip.

In addition to welcoming visitors and readers, the library is looking for more volunteers to help with fundraising and cataloguing.

The Feminist Library has a unique classification system. The current cataloguing project aims not only at preserving the system based on feminist scholarship but also making the catalogue searchable on line. It is intended that eventually rare pamphlets, journals and posters will also be available online.

• The Feminist Library is at 5 Westminster Bridge Road; open Saturday 11am to 5pm.