A frieze displayed in the window of the Coin Street Neighbourhood Centre in Stamford Street has been replicated in Matthew Darbyshire's new exhibition at the Hayward Gallery Project Space. 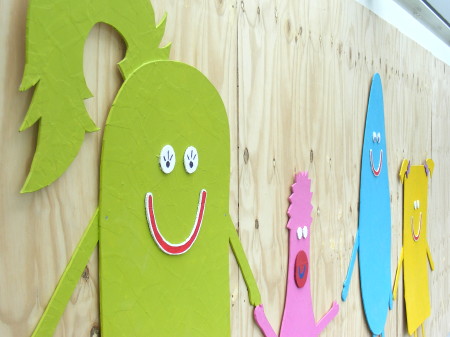 This frieze from Coin Street Neighbourhood Centre has been replicated at the Hayward. 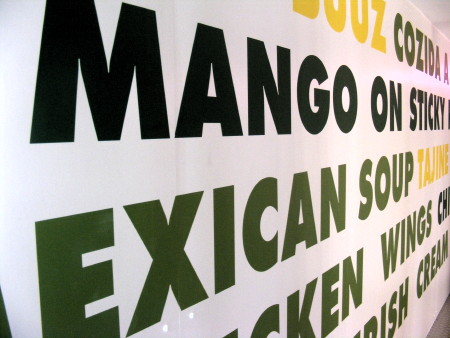 This lettering is copied from the Westminster Academy in Paddington

But instead of traditional fun and games Darbyshire has borrowed the 'visitor-friendly' design language of much British public and corporate architecture of the past decade.

Darbyshire has 'borrowed' elements from buildings around the country to create his Funhouse.

As visitors climb the stairs to the Hayward Gallery's Project Space they are greeted by a colourful frieze which is a replica of the set of characters to be found in the front window of the Coin Street Neighbourhood Centre in Stamford Street.

The characters were created by Oxo Tower Wharf-based designers 3 fish in a tree for Coin Street Community Builders as part of the marketing material for the new centre.

Furniture from the neighbourhood centre's lobby – including Verner Panton white plastic chairs for children and a Mies van der Rohe Barcelona stool in blue leather – has also been replicated for the Hayward show.

"It operates as a mini-survey of public access in post-Millennium England," explains Matthew Darbyshire.

What inspired Darbyshire to tackle this subject? "Specifically, in the arts, the emphasis on interaction and participation and [in learning and regeneration] fun, touch and activity rather than quiet, static, contemplative engagement."

The artist expects the visitor to regard the installation with weary familiarity at first sight. "Their heart will probably sink and they'll think they are in for yet another dead end, not-so-fun learning experience.

"The aim is that it doesn't offer what one might expect. So you come in and its this very aestheticised, seemingly fun environment but actually there's very little interactive possibility. You can't actually fiddle or play with anything."

Other architectural elements appropriated by Darbyshire include the Millennium Bull from Birmingham's Millennium Point Arts complex, adorned with soft drinks cans and an oversized ear from an Orange mobile phone shop in Glasgow.

Borrowed or remade (sometimes with a twist), each of these fragments corresponds to features found in the traditional funhouse.

Darbyshire's tacit question to visitors: "Is this a people's palace, or a very contemporary house of horrors?'"