"By the end of the year we're going to have 600 apartments in SE1," explains Think marketing director Stewart Moore. 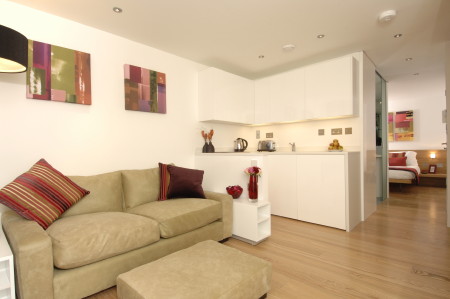 Think is the new name for Sunlight, the property firm responsible for a clutch of developments around Bermondsey including – most notably – the transformation of the old Sarson's Brewery at Maltings Place.

Sunlight was valued at Ł115 million by the Sunday Times who ranked its owner Graham Harris at 473 in this year's Rich List.

Think already offers long-term and short-stay accommodation at what it calls its "Tower Bridge campus". Defining exactly what Think does can be tricky at first: "We're not a serviced apartment provider; we're not a hotel; we're somewhere in the middle," says Stewart Moore.

By positioning itself like this, Think hopes to grab customers from both traditional hotels and serviced apartments. The firm can accommodate guests for any length of stay from one night to one year.

Short-stay accommodation is now available Think Bermondsey Street which will – later this year – offer a gym and swimming pool which will be available to guests at all Think's locations.

In Long Lane the company is creating a block of 99 short-stay 'pods'.

The company has carefully researched the 'pod' format which is something between a hotel room and an apartment.

"What we're trying to do is wrestle people away from hotels and put them in our apartments," says Moore.

He points out that Think's guests will enjoy benefits such as free wifi and use of a pool and gym at prices which are comparable with the likes of Premier Travel Inn and Travelodge.

Think has achieved this by taking out some of the added costs that hotel guests take for granted: "There are no minibars, there's no tipping, no extortionate food and beverage service that you don't use but have to pay for."

"What you're getting is an apartment that you can do what you want in.

"There's an iron, a dishwasher, a washer-dryer, a fridge-freezer; you can pop into Sainsbury's or M&S and grab what you want."

But as well as the self-sufficiency angle, Moore also praises Bermondsey's "lovely restaurant/bar vibe" which will appeal to guests.

Some councillors and community groups have voiced concerns about the proliferation of visitor accommodation in SE1, but Moore is quick to list the benefits of Think's style of operation compared to conventional hotels.

The absence of in-house catering means fewer noisy deliveries, and guests will inevitably spend money with local businesses instead.

He also believes that Think's Tower Bridge campus will draw a clientele that appreciates the character of the area. "If you want the soulless thing you can go out to Canary Wharf," he says.

"I think people choose Bermondsey not just because of its proximity to the City but also because there's a bit of a villagey feel to it."