A nine-month programme of borehole tests along the river for Thames Water's proposed Thames Tunnel has begun with the installation of a drilling rig near Westminster Bridge. 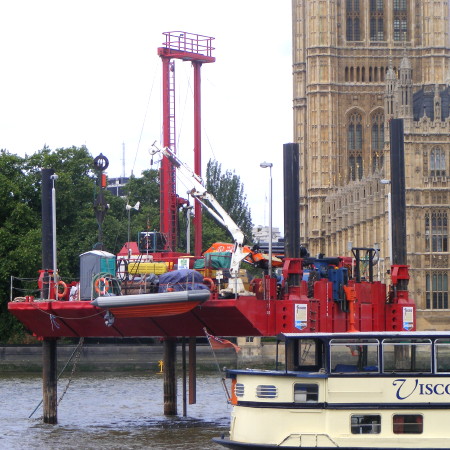 The rig seen from the grounds of St Thomas' Hospital

About 32 million cubic metres of untreated sewage – enough to fill the O2 Arena 15 times – currently flows into the river each year during rainfall.

The Thames Tunnel, which will broadly follow the course of the river, and the Lee Tunnel, a four-mile sewer to stop sewage overflows into the River Lee, are together known as the London Tideway Tunnels.

The borehole between Lambeth Bridge and Westminster Bridge will enable Thmaes Water to analyse the ground conditions that engineers digging the proposed tunnel are likely to encounter.

Further boreholes will soon be created near Bankside and London Bridge.

"The boreholes in the river are key to helping us develop a detailed design for the Thames Tunnel," says Peter Antolik of Thames Water.

"Ahead of submitting a planning application in 2011, we first need to build up a thorough technical understanding of the potential constraints along the proposed route.

"Prior to setting up the borehole rigs in the river, we have been liaising closely with the Port of London Authority and local councils to ensure we minimise noise and disruption."

A maximum of three rigs will be in place at one time for up to three weeks at each location.

Thames Water argues that regulator Ofwat could impose price caps on the company's water bills which would make funding the tunnel more difficult.