The HSBC bank is closing its Albert Embankment branch on Friday 17 July because it is "no longer viable". 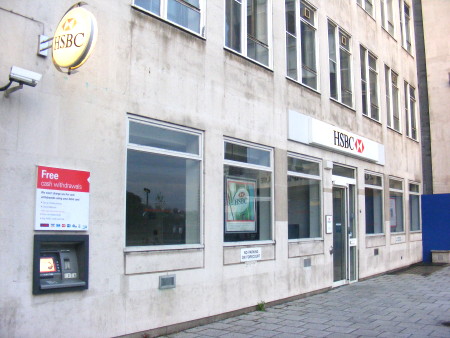 The bank is located at the base of Hampton House, an otherwise boarded-up office block which is earmarked for redevelopment with three new towers.

Notices at the branch advise customers to use the Borough High Street branch of HSBC instead. This bank is 1.7 miles away.

The closure leaves the SE1 area with just two HSBC branches at Borough and Blackfriars.

The nearest alternative branches as the crow flies are across the river in Vauxhall Bridge Road and Victoria Street.

"We don't take a decision to close a branch lightly as we do understand the impact it can have on customers, and would like to apologise for any inconvenience they may experience," HSBC spokesman Tim Pie told the London SE1 website.

"There are a number of reasons behind the decision, chief among these being that the branch has seen declining use for several years to the point where it is no longer viable to keep it open."

HSBC claims that fewer and fewer people are using branches and many are using telephone and internet banking instead.

The bank says that the three staff currently working at the Albert Embankment branch will be redeployed to nearby HSBC branches.