Lambeth Council and the police will reintroduce the Waterloo dispersal zone following a sharp decline in the number of rough sleepers and street drinkers in the area over the past six months. 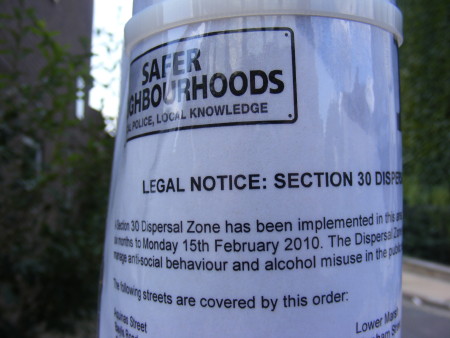 After a six-week gap the the Waterloo dispersal zone will be in force for a further six months from 17 August to 16 February after 165 dispersals and five arrests were made within the previous dispersal zone which was in place from January to July.

A senior police officer can designate a dispersal zone where there is persistent anti-social behaviour and a problem with groups causing alarm, harassment or distress.

The zone gives police officers and PCSOs to disperse groups whose presence or behaviour has resulted, or is likely to result, in a member of the public being harassed, intimidated, alarmed or distressed.

A police officer or PCSO can also escort any young people under 16 – who are out on the streets after 9pm and not under the control of an adult – to their home address.

The area covered by the dispersal zone has been changed slightly to include the area around Archbishop's Park – including Carlisle Lane, Upper Marsh, Hercules Road and Royal Street – where there have been problems with rough sleepers.

The area around the Tanswell Estate (Coral Street, Frazier Street, Pearman Street and Morley Street) has been removed from the zone as the dispersal powers were not used during the first six months of the year.

Lambeth Police used extra powers provided by the dispersal zone to move on people responsible for persistent anti-social behaviour and to respond to hotspots in Waterloo where rough sleeping and street drinking had become entrenched.

The council says that in the past six months the average head count for persistent anti-social offenders has been slashed from 80 to 15. Crime has also been significantly reduced with burglary, shoplifting, and anti-social behaviour down by approximately 20 per cent since the zone was first introduced in January.

"The zone lends police additional powers to address the problem head-on and enable our dedicated outreach team to focus their energy on engaging with our street population to assist them into treatment and care or to find temporary accommodation," explains Cllr Mark Bennett, the borough's cabinet member for community safety.

"Many of the individuals found in the Waterloo area are part of a drinking group or begging, and not rough sleeping, says team manager Andy Solomon-Osborne. "It is important to get the message across that anti-social behaviour will not be tolerated in Waterloo and the dispersal zone communicates this message. We must do all we can to prevent the area from becoming a magnet for anti-social behaviour as a lot Waterloo's street population is made up of people from outside of Lambeth."

• A refusal to follow an officer's direction to disperse can be punished with a fine of up to Ł2,500 or three months in prison.