Confusions at the Union Theatre

Alan Ayckbourn wrote Confusions in 1974, at a time when his work was becoming very popular, and playing to large houses in London. 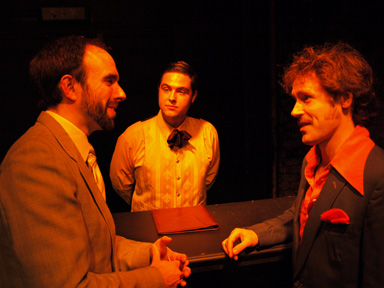 It was originally intended to provide his theatre company with a touring piece for a year or so, providing showcase pieces to each of the actors involved. It has stood the test of time, however, going on to become a very popular play, particularly with students and amateur societies, because of its versatile nature and the potential number of roles.

It's more of a series of five short miniplays. There are a total of 23 characters, originally played by five actors, and for the first four pieces one character is kept on to the next one, acting as a connection to what would otherwise be disparate chapters. In Mother Figure, neighbours Terry and Rosemary visit isolated mother of three Lucy to bring her a message from her rather estranged husband. This husband, Harry, is the key figure in Drinking Companions, where he tries to pick a girl up in a bar. The waiter who serves him in the bar becomes an earpiece for the audience in Between Mouthfuls, where he moves between the restaurant tables and arguments of two couples. The wife in one of these couples is a local town councillor, expected to make a speech in the fourth (and perhaps best-known) piece, Gosforth's Fete, a village fair gone awry, but then the fifth part has little apparent connection to the rest and is sometimes dropped from productions. A Talk in the Park features five characters searching to express their inner thoughts to strangers, each becoming a stranger for someone else in turn. It's a shame not to see the titles of the pieces mentioned in the bare bones programme, which makes it harder to pick out who plays which part at which point as a result.

It's a beautifully written play that deals with failing relationships and communication issues. Each of the characters portrayed suffers from some kind of unhappiness or frustration they are unable to express in a way that might help them, and through his naturalistic snapshots of their lives, Ayckbourn perhaps seeks to show some that when these frustrations are not allowed expression in one place, people seek fulfilment elsewhere. These are tales of often very miserable people, the bare bones of whose underlying miseries poke through into their communications with others, leading to inevitable misunderstandings. Very few people are able to be direct with one another, and the fallout that results is what's being looked at here.

It's a strength of the play that each chapter can work as a stand-alone piece; this was actually the first time I'd seen all five back-to-back, as they were intended. Finding the linking themes is one of the challenges the play offers, and it's helped greatly by the strong sense of style of Robyn Owen-Wilson's set and costumes. Ayckbourn's plays are sometimes seen as period pieces, and that's certainly true here. The food served in the restaurant is perfect seventies Delia Smith fare, and the characters all wear clothes and hair that could have leapt out of my parents' wedding photos. The furniture seems to have sprouted grassy tufts that begin as a little incongruous, but becomes familiar by the last two pieces, as though everything has led towards the vignette of five strangers on benches in a park all along. Steve Miller's lighting brings the bar and restaurant (pieces two and three) to confidential life as we spy on the conversations at the tables, and the piped music is a delight.

It is a good, faithful production, providing five intimate glances into these ruinous lives. The constraints of the small stage lead to some slightly crowded moments, especially in the restaurant of the third piece, where some actors end with their backs to most of the audience for much of the time. Of particular note were Howard Teale's socially inept Vicar, Claire Marlowe's powerfully rebellious Milly, Andrew Piper's strikingly rude Mr. Pearce and Charlotte Milchard's beautifully vulnerable Beryl. And Michael Mills' Waiter, a part that calls for technical excellence, is superb – with few lines to say, he is still the focus for Between Mouthfuls as he flits awkwardly from table to table. He contrasts this well with a believably restless Ernest in the last act.

This was originally a five-piece cast however, and calls for virtuoso variety. For all that, as there are nine actors to choose from in this production, there's an occasional loss of variety, with the pace becoming slightly too slow and too careful, and the actors maintaining their rhythms from one appearance to the next rather than revelling in the contrasts in their characters. The comedy can come more from the sincerely miserable and confused people involved in these short and ridiculous moments. The very funny moments, which are successfully struck, are more in focus than the sadder or crueller parts that forms the basis of the comedy. The fifth part in particular, a slow and disjointed piece at great odds with the preceding slapstick of Gosforth's Fete and very hard to pull off, seems to lack the urgency that drives the characters to make their revelations to one another.

But these are quibbles; this is a solid, funny and detailed production that makes for a very enjoyable, if undemanding, night out.