Southwark residents have been invited to choose whether their borough should be represented by the Elephant & Castle or Shakespeare's Globe in a set of souvenir pin badges to be produced for the London 2012 Olympics. 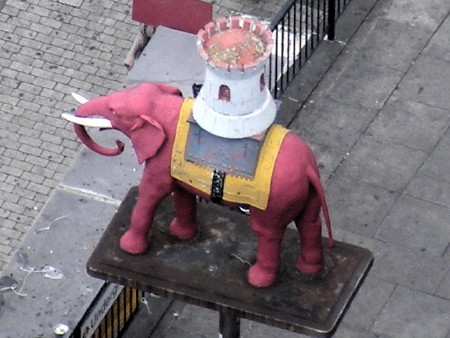 Should the pink elephant - with its peeling paint and rundown surroundings - be Southwark's Olympic icon?

A set of 33 badges is to be produced – one for each of London's local authorities – and a public vote is under way to choose the images to represent each borough.

Residents of Lambeth are asked to choose between the London Eye, Brixton Windmill, Lambeth Town Hall and Lambeth Walk.

"Pin badges are a popular part of the heritage of the Olympic and Paralympic Movement with each Organising Committee producing a range of these collectors items that appeal to different people," says Lord Coe, chair of the London 2012 Organising Committee.

"Inviting Londoners to create the 'Landmark London' set is one of many ways people will be able to get involved in the London 2012 merchandise programme."

Honav, the official London 2012 Games pin licensee, has pledged to create 2,012 individual pins to commemorate the 2012 Olympic and Paralympic Games. The 'Landmark London' set will comprise 33 individual pins featuring a landmark from each London borough.

The results of the 'Landmark London' vote will be announced as part of the celebrations for 1,000 days to go until the start of the 2012 Olympic Games at the end of October 2009. The pin badge set is expected to go on sale next year.

• The public vote is at www.london2012.com/landmark – closing date 18 October.