Police investigating the murder of Leah Questin, whose body was found in a suitcase in Kent last week, have released a CCTV image of her at Elephant & Castle Station. 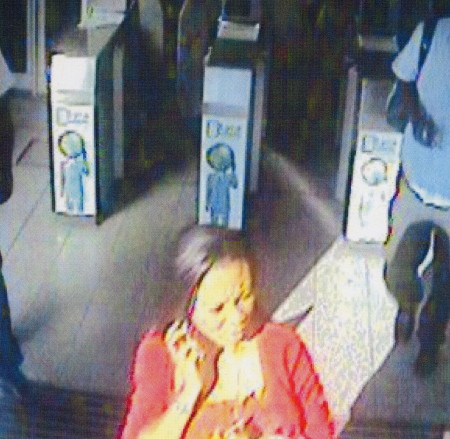 On Thursday 24 September officers from Kent Constabulary found a badly decomposed body in a suitcase in a dried-up pond by farmland in Cliffe near Rochester.

The victim has been identified as 37-year-old care worker Leah Questin from NW2.

Leah had been reported missing to the Missing Persons Unit in Brent by a friend at around overnight on 16/17 September.

"As a result of enquiries into Leah's disappearance, we have established through CCTV footage that she travelled alone on the 172 bus in the area of Elephant & Castle and was heading south," explains Detective Chief Inspector Peter Lansdown.

"She boarded this bus on the New Kent Road shortly after exiting Elephant & Castle Underground Station.

"It is still not clear where she was heading to.

"Leah is described as 4ft 11 inches tall with a petite build. She has a light complexion and long black hair. Leah was wearing a red top and blue jeans.

"I appeal to anyone who saw Leah in south east London or on the 172 bus or its route on Saturday 12 September to contact us.

"We also need to hear from anyone who may have seen her after 12 September and up until her body was found as we need to understand where she was going, who she was meeting and how she came to be murdered.

"We continue to liaise with our colleagues at Kent Constabulary and I would like to thank them for their work during the early stages of this enquiry."

A 35 year-old-man was arrested in Lewisham on Tuesday morning on suspicion of murder. He remains in custody at a north London police station.