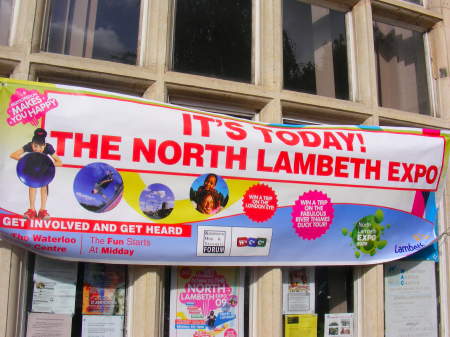 Residents of Bishop's, Princes, Oval and Vassall wards were encouraged to come to Waterloo Action Centre on Saturday to 'have their say' and visit stalls run by council departments, other official bodies such as NHS Lambeth and local voluntary organisations.

There was also entertainment provided by local groups, food and competitions to win prizes.

A system of annual area-based events with an emphasis on entertainment – called people first expos – was established last year by Lambeth Council to replace the area committee system introduced by the previous Liberal Democrat administration.

The three Lib Dem councillors for Bishop's ward – Diana Braithwaite, Gavin Dodsworth and Peter Truesdale – have circulated a letter highlighting their concerns about the new system.

"When the Lambeth area committees were replaced in 2006, we argued that it was no good the Labour administration just saying they didn't work, they needed something better than a back of an envelope guess on how to 'engage' residents," say the Waterloo councillors.

"Three years on we have something which is the worst of all worlds. A patronising vote for local groups to 'win' £500 of funding, when the area committees had real decision making on over £1 million over the electoral cycle, the claim that the expos have been handed over the voluntary sector, when a more honest summary would be that they have been dumped on them because the Labour group has either lost interest or doesn't know what to do with them.

"This has taken us back years in getting people really involved in where they live. The claim that 'more people turned up' is also crazy, it's like saying more people voted for Strictly than the local elections.

"Residents want something meaningful and yes, possibly less formal, but what they don't want is democracy replaced by hooking a plastic duck out of a bowl in order to win a prize."

The Lambeth system of annual events with an emphasis on fun stands in contrast to the community council model adopted in neighbouring Southwark, where local public meetings are held every six weeks.

The area committee meetings included provision for residents to put questions to councillors in public. There was no similar element of accountability at the North Lambeth Expo.

Did you visit North Lambeth Expo? Do you agree with the Waterloo councillors?