Holby City star Amanda Mealing met staff and patients at St Thomas' Hospital on Friday as she prepares to take part in a charity carol concert at Southwark Cathedral. 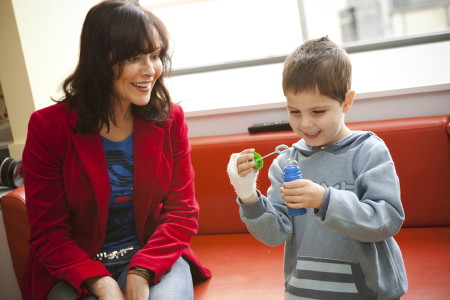 Amanda visited a number of services which have benefited from the support of Guy's and St Thomas' Charity including the neonatal intensive care unit which cares for premature babies and the dialysis unit at the Evelina Children's Hospital, as well as seeing a range of artworks which help make children feel more welcome.

Amanda, who grew up in Dulwich, is best known for playing Connie Beauchamp in popular hospital drama Holby City, as well as roles in The Bill and The Lakes and the hit film Four Weddings and a Funeral.

She is joining The Wire's Dominic West to read at a special Carol Concert at Southwark Cathedral on Monday 14 December.

Amanda is grateful to Guy's and St Thomas' for treating her best friend, TV personality and SE1 resident Paul O'Grady.

The star-studded event is being held to celebrate Guy's and St Thomas' Charity's contribution towards the hospitals and to raise funds to enhance future services.

"I am so pleased to be able to take part in this year's Christmas concert in aid of Guy's and St Thomas' Hospitals, not just because of the long standing service it has given the community but because when my best friend had a heart attack, it was here that he was sent," says Amanda.

"The fear of losing someone so treasured can be a painful experience but that fear was soon dispelled when I came to see him at Guy's. The care and attention he had was amazing. Not only that, but for me, and other friends and family, it was incredibly reassuring to know that he was in the best place he could be.

"I am happy to say that Paul O'Grady, my best friend, is very much alive and well. I have looked for a way to repay something that is, without doubt, priceless. It is with huge sense of gratitude that I will take part this December."

The Carol Concert will feature Winner's Chapel Gospel Choir and a special performance by young patients from the Evelina Children's Hospital. Concert tickets are Ł20 each from Guy's and St Thomas' Charity on 020 7188 6295 or [email protected].

Guy's and St Thomas' Charity raises funds to support the needs of Guy's and St Thomas' NHS Foundation Trust. It has helped create the new Evelina Children's Hospital and equip the hospital to the highest standard. It also funds new services which provide enhanced care for patients of all ages, and supports research which can be translated into patient care.