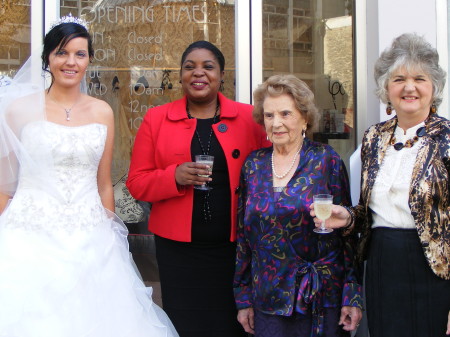 The Wedding Wardrobe has replaced the lighting shop opposite Church.co.uk in Kennington Road.

The new shop is being launched by Coralie Davies-Jones who has lived nearby in Kennington Road for 25 years. She comes to retail after a career lecturing in child development which started with ILEA at County Hall and took her to Malaysia and Singapore.

Just hours before the official launch there was some tension as the dresses had arrived but the specially made rails had not. Coralie's family have helped with preparations including hanging the silver wallpaper.

At the opening her three and half month pregnant daughter-in-law Carol-Anne was outside modelling one one of the new dresses.

"I know the local girls," says Coralie who claims not to be at all daunted by the credit crunch and has dresses on show from £725.

The basement has been converted into changing rooms.

Coralie thinks her dramatic change of career is partly due to her artistic side. She once taught needlework.

She also makes wedding cakes for friends. Her son's wedding breakfast featured a special "five tier inferno" but she insists that at the shop she is concentrating on dresses.

• The Wedding Wardrobe is at 4 Kennington Road.