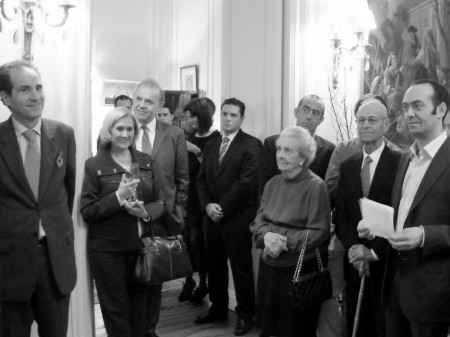 Speaking at the launch held at the Spanish Embassy on Thursday evening, the ambassador Carles Casajuana i Palet said that when he was a child all food was seasonal.

"I remember that we had watermelon in summer, artichokes in spring, oranges in winter and mushrooms in autumn. The food was very good and what we would call today oragnic food."

José Pizarro said that it was an honour for him to be at the Spanish Embassy surrounded by family and friends.

"It is a dream come true for someone from Talavin to be here representing Spanish culture. I can only thank my parents for that. Since I was a little boy food was precious. Food was a fiesta."

The guests of honour at the party were José's family from Extremadura who feature in his book and during his speech he broke off to thank them in Spanish for what they had taught him.

In the book he writes: "My feeling for Spanish food comes from the family even though I now cook for a living."

Between recipes José adds both memories and reflections about the importance of seasons such as Christmas, Lent and Easter and special days in the liturgical year which have their own traditional dishes.

He also describes being able to buy seasonal food in Borough Market and his delight that its twinning with La Boqueria in Barcelona brings Spanish food colleagues to SE1 each year.

The book is co-authored by food writer Vicky Bennison who met José as a regular diner at Tapas Brindisa. The photographs of food and the family farm near Talavin are by Emma Lee.

Guests at the party enjoyed samples of autumn food featured in the book including mushroom and chestnut soup, baked scallops with crispy serrano ham and turrón mousse. Chocolates were from SE1-based Divine.