While Israelis are taught that 1948 is the date of their victorious independence, Palestinian history teachers describe it as "al nakba", "the catastrophe". 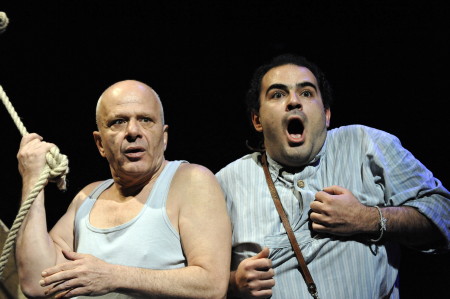 In I Am Yusuf, playwright and director Amir Nizar Zuabi has chosen to dramatise this disaster. With a sophisticated and complex web of characters, Zuabi shows us what happened to those who lived in Palestinian villages when the Israeli army seized them in 1948.

Naturally, the ship cannot go down without an onboard love story first. But Zuabi attempts something more ambitious than a melodrama against a historical backdrop. His gripping play tells the story of Ali and his "stupid brother" Yusuf.

Yusuf may be the poor village idiot but he needs little more than love from Ali. Unfortunately, Yusuf complicates things for his brother. Ali desires local girl Nada, but her father won't entertain the idea. Meanwhile, the UN votes on who will control Yusuf and Ali's country, and British soldier Rufus is preparing to ship out and return to the grey skies of Sheffield.

His story is a powerful plight in fluent parallel to that of those in his charge: everyone has a homeland and, although the connection may be inexplicable, it is also unshakeable. This plotline is woven competently into the play; others are not. A number of Zuabi's vignettes are detached from the storylines whose thread we don't want to lose.

The background action is often not subtle enough, confusing the audience and detracting them from the universally excellent performances. And the director also re-uses some visuals one too many times, which not only turns them stale but also diminishes their power.

Finally, the tragic end of one character, which risks bleeding into melodrama, is simply too long. In his defence, Zuabi may point out that time is flexible in I Am Yusuf. Indeed, one of the play's most exciting assets is its merging of past and present through the portrayal of two characters as young and old. It is the hardest working, yet effortless, element in this powerful chaos.