Muhammed Haris Ahmed, a 21-year-old medical student at King's College London, was killed on Tuesday as he cycled to Guy's Hospital. 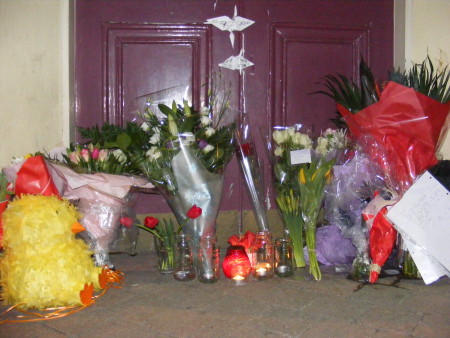 Flowers and candles have been placed outside The Rose pub at the corner of Snowsfields and Weston Street by friends of the dead man.

Police were called at around 9.50am on Tuesday morning to reports of a tipper lorry in collision with a pedal cyclist. Mr Ahmed was pronounced dead at the scene.

A man in his 30s was arrested at the scene. He has been bailed to return pending further investigation.

The incident is being investigated by the collision investigation unit at Catford Traffic Garage.

The union's elections for sabbatical officers and trustees have been extended in recognition of the effect that Mr Ahmed's death "has had on both the student body at King's and many of the candidates".

Mr Ahmed had been closely involved in 'RAG week' charity fundraising at Guy's and the KCL mountaineering society.