London South Bank University students this week staged a demonstration outside a meeting of governors. 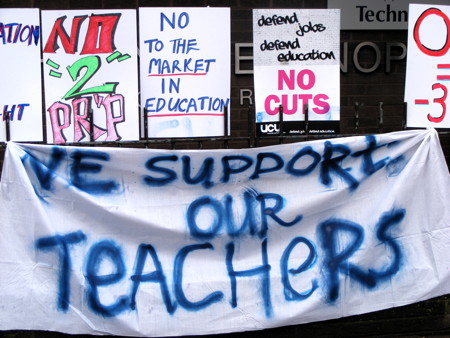 The joint union committee called a lobby at the Technopark entrance in London Road on Thursday during a meeting chaired by the vice-chancellor.

The protest, which had the backing of Unison, GMB and UCU unions, called on LSBU to recognise national pay deals and halt announced cuts.

"The university management has reneged on local agreements. It has unilaterally reinterpreted the UCU contract to impose work-loads. It has imposed a new appraisal system on lectures without agreement."

"We want to confront them about cuts," said students' union vice-president Jonathan Dodds who was part of the crowd outside. "It's going affect all South Bank students. This is a preemptive strike to try and halt what we have seen at Sussex and King's."

Dr Markos Koumaditis, executive assistant to the vice-chancellor, said: "This year, in consultation with the governing board at LSBU, the university's vice chancellor, Professor Martin Earwicker, introduced a pay freeze to all staff, including senior executives and the vice chancellor, to safeguard the long-term future of the university and to reduce the number of possible redundancies.

"As each university is affected by different pressures and opportunities, at both national and local level, the vice-chancellor is in ongoing discussions with the unions to explore moving towards local pay negotiations."

• Staff at King's College London, which has several campuses in SE1, will strike on Tuesday 30 March