Woman camping on South Bank in "I’m a Celebrity" protest

A woman is camping outside ITV's South Bank studios in protest against the treatment of animals on reality TV show 'I'm a Celebrity, get me out of here!'. 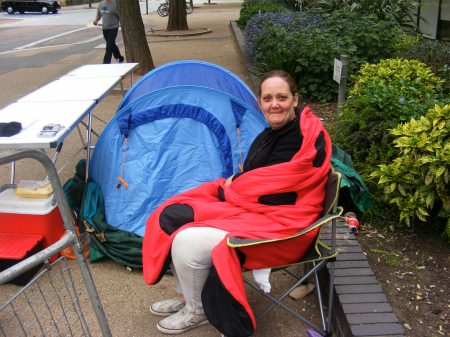 Wendy Wells, 49, from Essex, pitched her tent in Upper Ground on Monday in protest against the show's bushtucker trials, which often see the celebrity contestants face animal-eating challenges in order to win food supplies for the rest of the group.

Wendy said: "I think it's wrong to abuse any animal for entertainment. It desensitises people – if they see an animal being abused and it's a joke like on this programme, then it tells children 'it's OK to do this'."

The show has been criticised by animal welfare groups, including the RSPCA which has called the trials "unacceptable". In February, the broadcaster was fined A$3,000 (Ł1,903) plus costs under Australian legislation for animal cruelty, after two contestants on last year's show killed and ate a rat.

Buglife, a UK charity that promotes the conservation of insects, said they supported Wendy's efforts to highlight the issue.

Director Matt Shardlow said: "We have been raising the issue of how bugs are treated on 'I'm a Celebrity' for several years now. The killing, maiming and even humiliation of invertebrates for the purpose of television ratings is crassly immoral and wrong."

Wendy said that she doesn't want the show to be axed completely, but she does want trials that involve animals being eaten or stressed to be stopped. She has set up a Facebook group, 'I'm a Frightened Arthropod, Get Me Out of Here!', and has vowed to remain outside the studios collecting signatures for her petition until producers agree to meet her.

Wendy said: "I would like a meeting to be able to show them the evidence from different animal welfare organisations and to show them the petition. Ironically, I've had more attention from ITV trying to get me off here than I have in tying to talk to me for a meeting."

An ITV spokesperson said: "At each bushtucker trial, which features animals or insects, we have qualified and experienced animal and insect wranglers on site – every trial has been carefully tested and developed.

"RSPCA New South Wales visit the site during the production period to inspect the trials and we endeavour to take all their advice on board. We have corresponded with Ms Wells on a number of occasions and have outlined our position."