Exposed: Voyeurism, Surveillance and the Camera at Tate Modern

An exhibition of photographs taken surreptitiously or without asking permission of the subject has opened at Tate Modern. 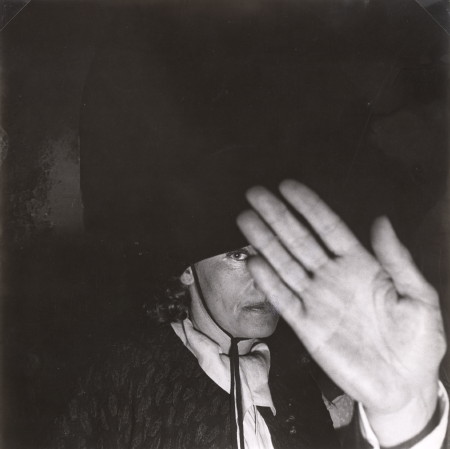 This exhibition is curated by Sandra S Phillips of San Francisco Museum of Modern Art so most images are American. However, it's interesting to find in the Unseen Photographer section at the beginning an 1892 picture of a female magazine seller at Ludgate Circus.

The caption tells us that 'Tit Bits was her greatest sale'. The mass circulation paper was for many years printed in Stamford Street.

Other photographs are more tabloid. 'Degas coming out of a pissoir' is dated 1889. There is also a picture of poet and photographer Charles Henri Ford adjusting his clothing in a Paris public lavatory.

An early modern tabloid shot shows Elizabeth Taylor and Richard Burton lying together in the sun. The photographer manages to be above the the couple.

Other pictures were openly taken close-up but the photographer went unseen by a subject too traumatised to notice. In this category fall Jacqueline Kennedy on the plane after her husband's murder and Paris Hilton being returned to prison.

After the Voyeurism and Desire section, mainly made up of grainy photographs and jumpy film, there are two rooms devoted to Witnessing Violence. Here the images are very disturbing with reminders of gas chambers and public lynchings in America.

But most surprising is the evidence of tiny concealed cameras being used in the 19th century. A flat 'vest camera' on show is thought to have been used around 1886. Other cameras are hidden in a shoe heel and a walking stick.

Paul Strand's revealing photographs of New York poor in the early 20th century were taken by using a camera with a false lens so giving an impression of pointing the other way.

Exposed will be shown at the San Francisco Museum of Modern Art in the autumn.