Diners at restaurants in Isabella Street had their lunch disrupted on Monday when ventilation ducting at Ev restaurant caught fire. 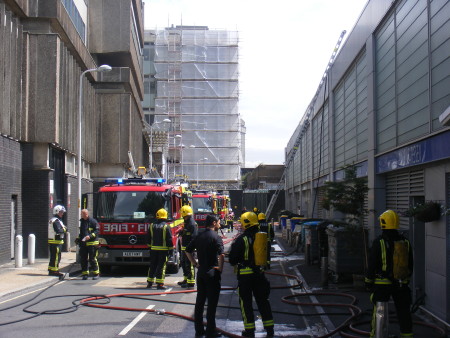 The London Fire Brigade was called at 12.50pm to reports of smoke coming from the roof of a restaurant on Joan Street.

Four fire engines and approximately 20 firefighters tackled the blaze. A ventilation duct from the ground floor to the roof of the restaurant is thought to have caught fire.

Although Ev, Jack's Lounge and Thai Silk were all evacuated, some diners continued to enjoy their meals in the open air on Isabella Street despite the drama around them.

Dozens of BT Openreach staff were evacuated from the Colombo House telephone exchange and congregated at Hatfields Green.

The Blackfriars Road post office was also closed to the public because of the fire alert.