New home for Bramah Tea & Coffee Museum gets the go-ahead

Borough & Bankside Community Council has resolved to grant planning permission for a new building to house Bramah Tea & Coffee Museum in Calvert's Buildings off Borough High Street - on condition it opens to the public on weekdays only. 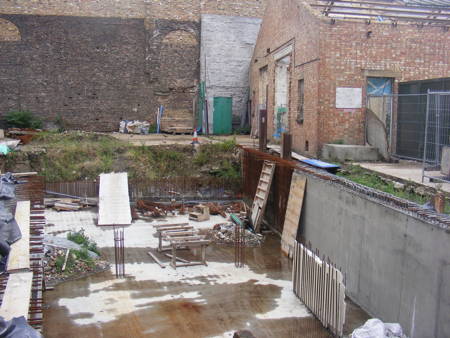 The site of the proposed Tea & Coffee Museum. The foundations were built without planning permission and without a properly approved archaeological investigation 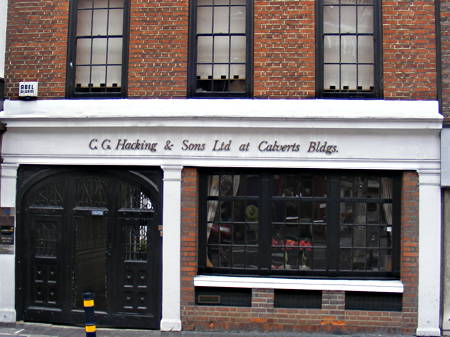 Edward Bramah founded the tea and coffee museum at Butler's Wharf in 1992. The museum relocated twice, ending up at Wilcox House in Southwark Street.

Within months of Bramah's death in January 2008 the museum shut down and Leyland SDM opened in its place.

During 2008 Don Riley began – without planning permission – to excavate the basement of his proposed museum building between Calvert's Buildings and St Margaret's Court.

Southwark Council issued an enforcement notice against Don Riley in October 2008 for unauthorised excavation within an archaeological priority zone, a conservation area and adjacent to a listed building. Mr Riley appealed to the Planning Inspectorate and a public inquiry was held in March 2009.

"The evidence shows that there is acknowledged archaeological interest in the area of the site, particularly as the sandy islands on the southern bank of the river are recognised as having been the location for a Roman settlement and that locality became a medieval settlement later," wrote Mr Dyer.

"The appellant's own watching brief demonstrates that there are many archaeological remains present on the site including part of a Roman building as well as fragments of pottery.

"In that light it is plainly desirable that there should be an investigation of the ground beneath the appellant's land.

"That investigation will be hindered by the foundation works that have been carried out."

Mr Riley also submitted a planning application to Southwark Council for the construction of a new building to include two two-bedroom flats accessed from St Margaret's Court and space for the tea and coffee museum in the basement to be accessed from Calvert's Buildings.

Visitors would reach the museum via a narrow alleyway from Southwark Street.

The application was considered by Borough & Bankside Community Council on 3 June this year.

Calvert's Buildings resident Sven Arnstein spoke for the objectors to the development and explained his concerns about loss of daylight and privacy, as well as fears for security.

Don Riley addressed the community council and spoke about the wider importance of Edward Bramah's vast knowledge of the tea and coffee industries.

"This is to be the repository of his experience and those he formed an association with: tea planters and coffee experts from the 50s, 60s and 70s," he said.

Mr Riley explained that the reborn museum would act as "a trading place for ideas, for information, for books and for the whole 300-year history of the coffee and the tea trade".

He said that the museum will tell the story of "250 years of extraordinary British adventure in Africa and India".

Answering concerns from councillors and objectors about the likely volume of visitors to the secluded yard, Mr Riley explained: "100 visitors a day would be a huge success for this type of learned operation".

He said that some 20 or 30 people a week continue to arrive at the museum's previous address in Southwark Street.

At its June meeting the community council deferred a decision on the application in order to allow expert evidence commissioned by Mr Arnstein to be considered and for councillors to make a site visit.

The community council resumed its consideration of the application last Monday night.

Objectors were represented by Sophie Potter of Dannatt, Johnson Architects who said that this "remote location" so far from the main streets was unsuitable for a museum. She also warned that visitor control measures could compromise the character of the Calvert's Buildings courtyard.

At the second meeting Don Riley was represented by his son Nicholas, who said: "People in the community are very insistent that this museum is brought back to life," adding that people are "crying out" for the Bramah collection to be returned to public display.

He reiterated the point made by his father at the earlier meeting that the museum did not need to attract large numbers of visitors to ensure its continuing viability.

"This is an extraordinary location to put something that's a hobby," said Cllr Adele Morris.

She asked: "Can it genuinely afford not to make money?"

"I believe so," replied Nicholas Riley.

Answering concerns from councillors about the earlier works to excavate the basement without planning permission, Nicholas Riley distanced himself from the earlier history of the development.

"That's not something I see as the right thing to do at all," he said.

Nicholas Riley indicated that he was prepared to accept a suggestion from Cllr Tim McNally that the museum be prevented from opening at weekends in order to protect the amenity of the existing residents of Calvert's Buildings.

On that basis, the six-strong community council resolved unanimously to grant planning permission for the development.