Last month a group of guerrilla geographers took over the Golden Hinde for the launch of a new iPhone app called Mission:Explore which encourages young people to engage in "playful research" to get to know their surroundings. 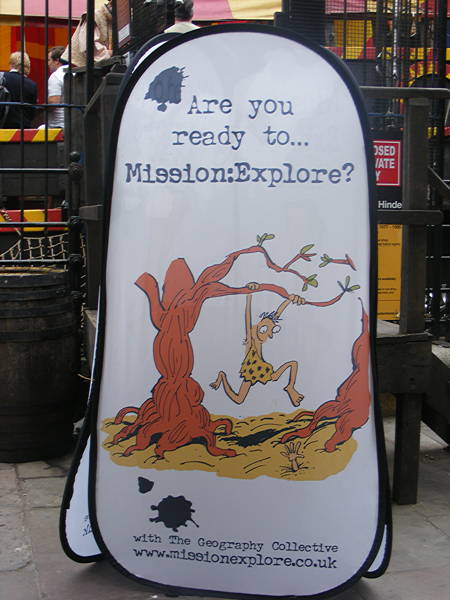 "Mission:Explore London is an extension of an idea which we had about two years ago, which was that young people didn't really get out into their surroundings very much," explains Alan Parkinson of the Geography Collective.

"They didn't know about their home area, there was a fear with parents about abduction and general mistrust of people in their surroundings.

"Geography is about power, it's about the relationships that people have, and it's about our relationships with place as well. And so the idea of Mission:Explore was that we would provide a series of missions that young people could carry out. The aim of the missions is what we call playful research.

A Mission:Explore book has been on sale for a few months and it has now been joined by an iPhone app launched to coincide with the summer holidays. You can also find the missions on the www.missionexplore.co.uk website.

"The book has about 100 missions in it," says Alan. "The app has 1,000 missions and every mission has been risk assessed. We've visited every single location and the missions are deigned to be carried out in a range of locations.

"There's a very simple one, which is, every time you see a person with a beard, just turn to stone, just for a few seconds until they pass you and then carry on walking. And, of course that might, for some people, they might say, 'Well, that's not geography', but what it is allowing you to interact with another person.

Examples of missions in SE1 include model-making on the Thames foreshore by Gabriel's Wharf, exploring animal and insect habitats in Red Cross Garden and promnesia in Emma Cons Gardens.

The app also prompts users to write a short story in St George's Garden and look at David Copperfield Gardens in New Kent Road through a picture frame.

Alan explains that Mission:Explore is a not-for-profit venture. The app is free to download and there is a scheme to provide copies of the book to children in underprivileged areas.

"None of the profits are going to us. It's all about buying copies, getting those missions out there, getting young kids exploring."

And what of the coverage area of the app? "We have got quite good coverage in central London," replies Alan.

"The original idea was to have missions in as many grid squares as possible. What we decided to do in the end was to cover the main central area where visitors might go.

"Obviously there are differences in the way that visitors and residents see London, and we're certainly open to suggestions for other missions.

"We certainly aren't the only people who can come up with these missions. We just seem to have got it right here, in that it's a product which engages people."