Man who shot at police in Isabella Street convicted

A man who shot at police officers outside restaurants in Isabella Street near Southwark Underground Station last August has been convicted of a range of offences. 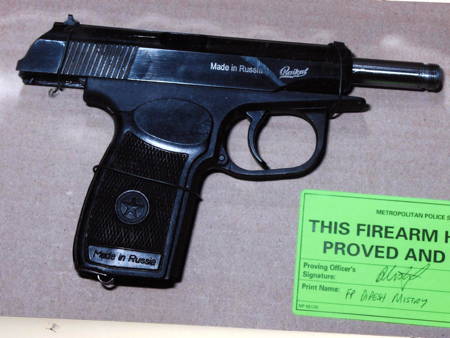 The Baikal firearm used by Hall

Three men who carried out violent armed robberies have this week been found guilty at the Old Bailey – variously of aggravated burglary, firearms offences and possession of a firearm to endanger the lives of two police officers.

The series of events began on 22 July 2009 when Hall and Babalola forced their way into the home of a 25 year old woman in Walworth and held her at gunpoint. The woman's children, aged 5 and 10, also witnessed this terrifying incident, as did two other women who were held by the men in the kitchen of the property. The men demanded to know where her brother was, before leaving with money and property.

Six days later, on 28 July 2009, Hall and Ozdil stopped a 17 year old man in Inville Road SE17 and robbed him at gun and knifepoint. The victim only had a small amount of cash so the robbers forced him to take them to his home address.

Once they arrived at the address the victim protested that his parents might be in the property but they insisted he go in and get them more money. At this moment the victim's 72 year old grandmother came out of the address. Hall and Ozdil seized the opportunity and took her hostage – Hall pointing the gun to her chest.

The uncle of the 17 year old arrived on the scene and managed to get the grandmother to safety in the property. Whilst trying to get his family inside he was stabbed in the arm. Two shots were also fired by the robbers, narrowly missing the family.

Once inside they called the police whilst Hall and Ozdil tried to kick down the door before running off.

By 5 August 2009, Hall's details had been circulated as wanted in relation to the above incidents.

He was spotted by two police officers, PC Colin Hutton and PC Vincent Turner from Lambeth Borough, who tried to stop him. Hall did not wish to be caught and decided to run.

Once Hall was in Isabella Street he stopped briefly, turning to shoot twice at the officers. Again he missed and the officers were not injured, but Hall managed to escape them.

Hall was spotted again by officers on 18 August 2009 where he again ran from police. This time he chose to dispose of the firearm as he was running. He was finally stopped and arrested. The gun, a Russian Baikal, was found by police and forensics linked it to the robbery on 28 July 2009 and the shooting at the police officers on 5 August 2009.

Earlier, on 22 July 2009 the victims of the offence that occurred that day were contacted by Babalola. He threatened them and told them they would be shot if they provided any further assistance to police or attended court.

Hall was charged on 19 August 2009. He was subsequently acquitted of two counts of attempted murder of the officers, but convicted of the other offences.

Ozdil was identified and arrested and subsequently convicted. Babalola was arrested on 24 February this year, and was charged with aggravated burglary, false imprisonment and one count of witness intimidation.

"They were armed with knives and the gun which Hall eventually used to shoot at the officers who bravely chased him. Hall in particular showed no regard for life and recklessly shot at the officers in a busy crowded place.

"Today's verdict will be a relief to the victims and the local community who have had to suffer at the hands of these dangerous criminals."

The three defendants are remanded in custody for sentencing in due course.