Three pupils from the City of London Academy in Bermondsey were part of the winning team at the finals of the international Space Settlement Design Competition held at NASA's Johnson Space Center in Houston, Texas. 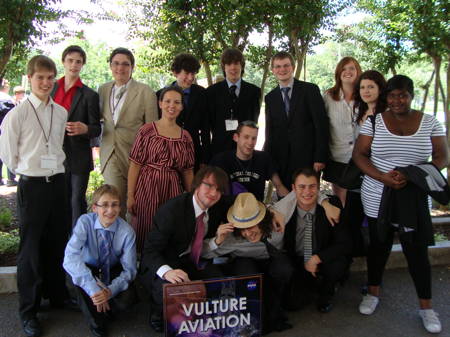 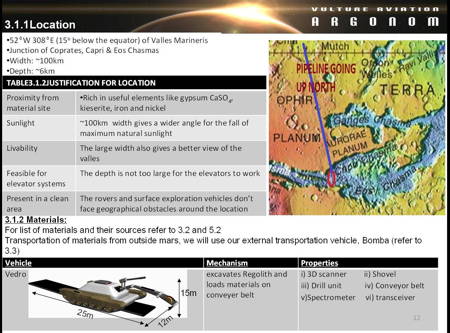 Part of the team's winning presentation

In early August Becky Follett, Joseph Dudley and Loretta Grazette – all students at the City of London Academy in Lynton Road – went to Houston, Texas to participate in the international finals of the Space Settlement Design Competition.

The students had already won their local and regional competitions, and in Houston they were teamed with other students from the UK, US and Pakistan to form one of four international companies competing to design a base to begin the human colonisation of Mars.

The companies had to work out their hierarchies and identify their specialists, as well as working together effectively to produce a full business proposal. The companies were assisted by a team of specialists, including experts from Boeing Aerospace.

The companies were presented with their task on Saturday lunchtime and had less than 48 hours to prepare their proposal for presentation to a panel of judges on Monday morning. The presentation had to provide a real solution based on real science, and it had to be fully costed and justified. The winning company presented a PowerPoint display of fifty detailed and fully illustrated slides.

The judges spent a long time deliberating over the different presentations, and it was not until 5pm on Monday evening that they were able to announce that Vulture Aviation, including the three City of London Academy students, had won.

Joana Monteiro, the academy teacher who accompanied the students, said that the event was amazing, creating an international community in which the students were, despite the competition, smart, kind and polite.

The NASA science support team also made the event really special, despite the fact that they were running between the competition and the control room of the International Space Station, dealing with problems as they arose.