After more than two months of hard work, Southwark's latest theatre is preparing to welcome its first audience. Volunteers from the Oikos Project have built the temporary Jellyfish Theatre on Marlborough Playground in Union Street. 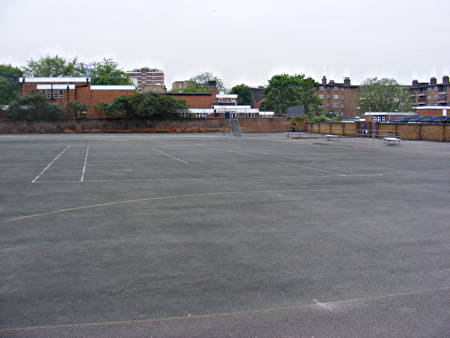 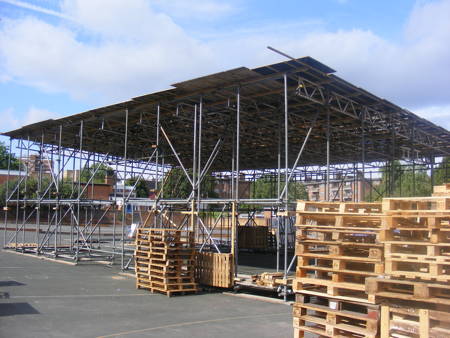 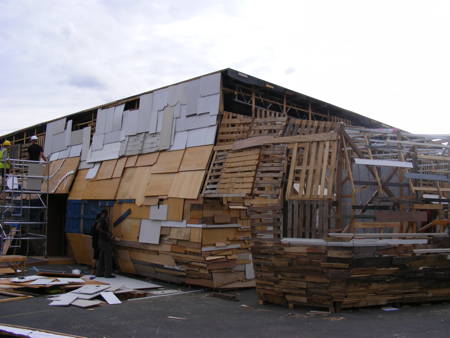 The first play at the theatre – Oikos by Simon Wu – opens on 26 August and examines what might happen if the River Thames bursts its banks.

The Oikos Project is a collaboration between the Red Room theatre company and the Architecture Foundation. Like the nearby Union Street Urban Orchard, it's part of the legacy of this year's London Festival of Architecture.

We asked artistic director Topher Campbell to explain what the project is all about: "The Oikos Project is many things: it's the building of a theatre which is made from reclaimed recycled material by a German architect called Martin Kaltwasser; it is also the commissioning a water bottle project which involves schools all around Southwark who are taking old water cooler bottles and reinventing them as ecology machines and climate change machines which will be part of the structure itself; and its the two plays we're putting on in the theatre by Simon Wu and Kay Adshead which are all about climate change and there will be some time for community focused activities in the space."

"A lot of people don't believe that climate change is going to affect us but I think it really will; some of us will be more affected and some will be less affected.

"[The project] is really a way to bring a community together to think about how we can collectively think about the issue instead of letting other people think about it for us."

And the name? "It's called the Jellyfish because we are very scared of jellyfish – but also jellyfish are endangered species so they are both vulnerable and scary at the same time," says Topher.

"And also it brings water and the ocean right here smack bang in the middle of urban Southwark."

Building work started back in June even though planning permission wasn't received until the end of July. Members of Borough & Bankside Community Council recorded their displeasure that tickets had gone on sale for plays even before councillors had had a chance to consider the planning application.

"I still think it's unforgivable that the London Festival of Architecture didn't understand that it needed to make an allowance for time to get planning permission," said Cllr Adele Morris.

She said that the Marlborough Playground is a valuable open space "that we have been fighting developers off for years" and she was nervous that the temporary theatre would set a precedent for development.

"This venture is full of hope and vision, something that may inspire people to find new ways of tackling environmental issues and offer new possibilities of how we might live in the future."

Oikos will be followed by Kay Adshead's Protozoa which runs from 23 September to 9 October. After that the theatre will be dismantled and many of the components will be recycled and reused by other local organisations.