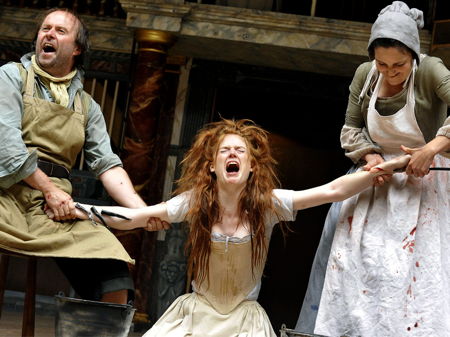 Leyshon, the first female playwright to write for the Globe in 400 years, has chosen to set her play in the 18th century when it was common practice for people to pay a penny to see the lunatics.

These 'open days' not only funded the hospital itself but were also thought to ward off the sort of moral corruption doctors believed induced madness in the first place.

A vibrant cast brings to life the corrupt Dr. Carew's (Jason Baughan) lunatic asylum complete with a group of Bedlamite musicians (ex-patients licensed to play music and beg on the streets).

With the arrival of beautiful new patient May (Rose Leslie) and a more enlightened and compassionate governor (Phil Cheadle) life at the asylum begins to change as Carew's own immoral behaviour continually blurs the fine line between madness and sanity.

Leyshon set out to write a funny play and there is much humour to be found in her narrative. Frequent asides and the odd bit of audience interaction enhance the role of the spectator as voyeur and draw parallels with the sort of innate voyeurism in the treatment of the mentally ill at that time. And the play is packed full of raucous song and dance, evoking an air of the old music hall.

However, by attempting to cover too much ground the playwright has perhaps missed an opportunity to focus in and confront some of the more pressing issues that are inevitably highlighted.

And although meticulously researched, Leyshon's script seems reluctant to fully embrace the inherent tragedy of the subject matter. Instead of hard-hitting tragicomedy we get comedic flirtation. The neat resolution of numerous storylines towards the end of the play also feels a little contrived.

There is some engaging acting. Sam Crane is charming as the impertinent Laurence, a foppish poet void of any decent morals who values his own amusement above all else. Ella Smith has a great rapport with the Globe yardlings as bawdy gin seller Phyllis.

And Daon Broni handles the role of Billy exceptionally well, especially as the part is quite underwritten.