The Human Comedy at the Young Vic

For sheer effort, exhuberance and movement, this UK premiere of Galt MacDermot's The Human Comedy cannot be faulted. 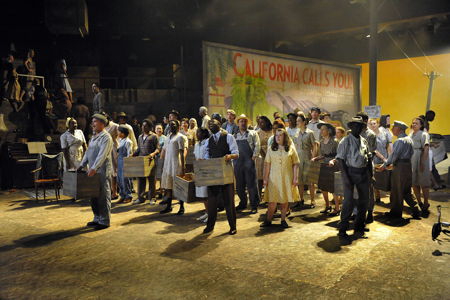 As the end of the evening, for the encore, an array of lovely kids sat at the edge of the stage smiling at the audience and so you clap all the louder. It is the kind of production which lends itself effectively to the Young Vic stage and every inch of the creative space is used.

But as a story, and as a musical, and neither of these are the responsiblity of the performers, there was something – the very essence it would seem – missing. Or maybe I am just getting older and I have heard the story of the soldier who did or who did not return from battle too many times before? Wootton Bassett can tell you that the homecoming of dead soldiers is primarily a sombre if not intensely proud affair.

On stage, the scene is California during the Second World War. The costumes, lighting and set live up to all expectations. Young Homer gets a job delivering telegrams [remember them? probably not] and it seems almost inevitably that one of his most sombre tasks is going to be to announce the death of his own loving brother who had gone away – only to fight for freedom. His family wait daily in fear.

"Death is not an easy thing for anyone to understand, least of all a child;" this theme is taken up but hardly pushed to its limit.

The first half was, all in all, a disappointment but the second half livens up with immediate, contrasting comedy and some more tuneful singing. Indeed the whole of part two focuses on the terribleness of the loss of life and war and California seems so far away from Normandy and the beaches there.

The mood certianly gets darker, but the quality of the singing across the principal actors improves as the night goes on, with everyone doing what they can to pull the production together.

A massive disappointment – bearing in mind the numbers involved and breadth of the Young Vic stage – was the lack of any real dance. I don't know why I expected a furious combination of different early dance moves – but there is so little it is worthy of note.

Congratulations to the band – workmanlike, progressive – if a little loud at times whilst soloists fought against the microphone dominated acoustic – but they worked like trojans throughout the night and were a tribute to the production.

Heading out onto The Cut on a balmy September evening I was glad that I had seen the remarkable efforts of the company, let down only by a very one dimensional storyline and an element of predictability which the production only just manages to overcome.