A broken down commercial vessel and a damaged passenger boat provided the emergency scenario in Operation Orange Tree on Thursday night. 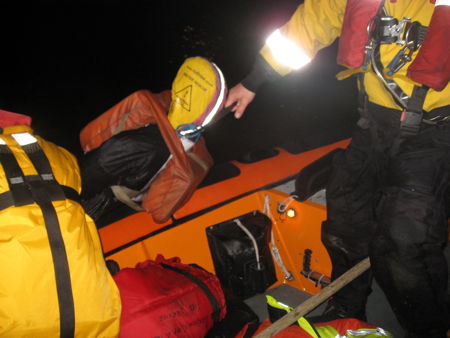 The exercise, which was coordinated by the Maritime and Coastguard Agency, simulated a collision on the water between a passenger boat and a commercial vessel.

A fire on one and severe damage to the other were also part of the scenario, which included several 'casualties' – weighted, lifelike dummies – in the River Thames near Tower Bridge.

Smoke effects were used to add to the realism of the exercise and a helicopter directed its search lights on the water.

Operation Orange Tree was designed to test the emergency responses of not only RNLI lifeboats stationed on the Thames, but also the police, fire and ambulance services, London Coastguard, the Port of London Authority, the Passenger Boat Association and other agencies.

This is the first time a major exercise like this has taken place during the hours of darkness. The last major multi-agency exercise on the Thames, 2006's Operation Palm Tree, was carried out in daylight.

The exercise began with an emergency message sent to the London Coastguard Operations Room at 8.30pm.

Tower RNLI and Gravesend RNLI lifeboats were tasked with search and recovery of the 'casualties' from the river, from Tower Bridge and downstream.

During the evening part of Tower Bridge was closed to pedestrians and emergency vehicles were parked along the north bank.

'Passengers' rescued opposite Butler's Wharf were all brought ashore at St Katharine's Pier.

"The Thames is an extremely busy river and it is quite conceivable that a major incident could happen, one which requires a coordinated approach by several agencies," says RNLI divisional inspector Andrew Ashton.

"As the charity that saves lives at sea and on the River Thames, the RNLI would be a key player in any real life emergency, hence we were heavily involved in the exercise.

"It was a really useful exercise for all concerned and, although the Maritime and Coastguard Agency have yet to hold a full debrief, we will be looking carefully to see what, if any, lessons can be learned."

The RNLI lifeboat service on the Thames in London was set up in the aftermath of the Marchioness disaster near Southwark Bridge in 1989.