BBC Radio 4's Any Questions? was broadcast live from the City of London Academy in Bermondsey on Friday evening. 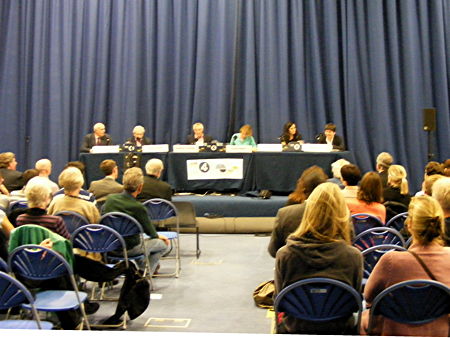 The politicians on the panel included shadow communities minister Caroline Flint who was congratulated on her new appointment by the chairman Jonathan Dimbleby.

Although the audience was made up of only around 50 people there was a vocal response from the floor to Dr Starkey's suggestions that the pensioner bus pass and fuel allowance should not be universally available.

"It's a smaller than normal audience," commented producer Victoria Wakely who said that a broadcast in Dorset would always attract a large number of people.

Jonathan Dimbleby said that he had heard about the the school before visiting this week.

Most of the discussions related to the economy although the panel briefly commented on Simon Sharma's appointment as government history advisor and answered a question about poetry.

Any Questions? was first broadcast in 1948 when the progamme came from Winchester where the first question was: "What effect would it have on world affairs if women could exert more influence?"

• Listen again to Any Questions?