A 1920s Pullman railway carriage is open to the public on the South Bank for three days to coincide with the Agatha Christie weekend at BFI Southbank. 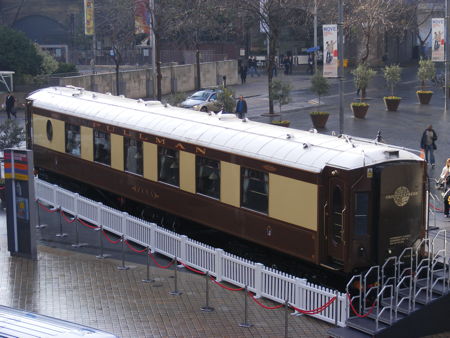 The carriage, which carries the name 'Zena', is open to the public in Southbank Centre Square – between the Royal Festival Hall and Belvedere Road – until Sunday 21 November.

The carriage, originally used on the Bournemouth Belle Pullman trains from nearby Waterloo Station, is owned by the Orient-Express company and used for day trips around the UK.

BFI Southbank's Agatha Christie weekend is part of a year-long nationwide celebration of the work of one of Britain's most treasured authors.

BFI Southbank is also hosting a special Agatha Christie Quiz, open to all to have the chance to win a host of Christie goodies including a very special 'Murder Mystery' trip for four aboard the British Pullman train.

Zena and her liveried stewards will welcome the public on board to experience the luxury and history of the Orient-Express, which captivated the imagination of Agatha Christie, inspiring one of her most famous works.

Visitors need not worry about any dastardly deeds going on, as an official Poirot look-a-like will be on hand to keep an eye on proceedings.