A woman whose heart stopped beating during a Good Friday visit to a Borough Market cafe has been reunited with the paramedics who saved her life. 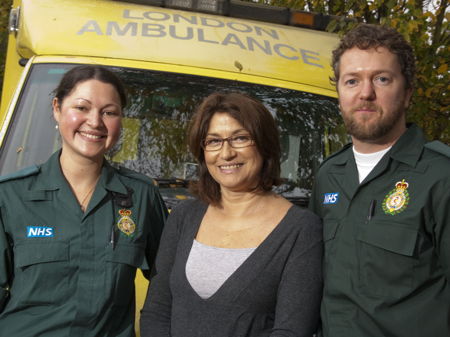 50-year-old Janet Newman of Herne Hill was in a cafe with her daughter Hettie at Borough Market on Good Friday last year when she suddenly started having chest pains, collapsed and suffered a cardiac arrest.

But luckily for Janet, paramedics Mark Wright and Bronya Hofman were just across the road getting their morning coffee and were with her in seconds.

"We were simply in the right place at the right time to save Janet's life," says Bronya.

"Every second counts when someone's heart stops beating and it is important to call 999 straight away."

The ambulance crew gave her heart a shock with a defibrillator and Janet's heartbeat returned.

Mark says: "Getting a defibrillator to someone suffering cardiac arrest, or starting cardiopulmonary resuscitation (CPR) as soon as possible, gives them the best chance of survival."

Janet was taken to King's College Hospital and fitted with an internal cardioverter defibrillator.

"It has been wonderful to meet Bronya and Mark again and thank them in person as I have no recollection of the Good Friday or of the following week when they came to see me in hospital," says Janet.

"I have started to write to them on many occasions but whenever I tried to formulate something in my mind, it didn't sound good enough to show how grateful I am for their help on that morning.

"They haven't only helped me but also my husband and our four amazing children.

"I have also received a lot of support from the hospital staff and the pacemaker I was fitted with helps my heart. This has greatly improved the quality of my and my family's life."

The latest London Ambulance Service figures show that the survival rate for people like Janet, who suffer a cardiac arrest outside of hospital in the capital, is now the highest ever.

Over one fifth of cardiac arrest patients (21.5 per cent) treated by ambulance staff survive to hospital discharge, compared to half of that four years ago (10.9 per cent).

The ambulance service says that one of the factors in the increased survival rate is the access to defibrillators in public places around the capital and the training provided to staff who know how to use them while an ambulance is on its way.