Members of the Defend LSBU! campaign group staged a 51-hour occupation of the Language Centre at London South Bank University this week in protest against cuts to higher education funding and the proposed rise in tuition fees. 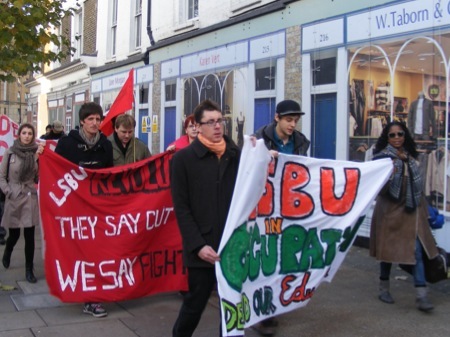 The occupation began on Wednesday as part of the nationwide day of action against education cuts.

The Defend LSBU! campaigners chose to occupy the Language Centre which has recently been closed by the university.

The centre offered London South Bank University students the opportunity to learn an additional language alongside their main studies. Now the only foreign language course on offer is Mandarin, funded by the Chinese government and provided through the Confucius Institute.

The occupation ended on Friday afternoon after the university's pro vice chancellor, Dr Phil Cardew, agreed to set up a meeting between the campaign group and the vice chancellor, Professor Martin Earwicker.

• Elsewhere, students from the London School of Economics and the University of the Arts London were involved in a protest at the constituency office of Simon Hughes MP at The Blue market in Bermondsey.