A man who posed for pictures of himself with cash made from forging identity documents has been jailed for four years after he was arrested during a stop and search operation at Elephant & Castle. 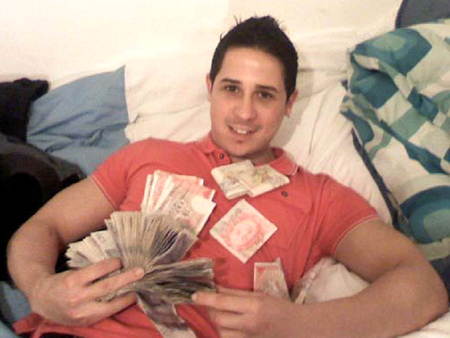 Cordoso poses with cash from his forgery business

Also found in the flat were over 400 capsules of Fenproporex, a Class C controlled drug, and pictures of Cordoso posing with large amounts of cash.

An investigation found that bank accounts had been set up using the forged documents and these would be sold on as a 'package'.

"Cordoso was at the forefront of an operation forging identity documents," says Detective Constable Jerry Meek.

"He was caught red handed by BTP officers with false cards in his pocket and had a flat full of equipment used for this crime.

"The pictures we found of Cordoso show his complete disregard for the law.

"Forging documents plays a part in the much larger picture of criminality across the country and Cordoso's sentence reflects this."

Sentencing Cordoso to jail, Judge Hillen said: "Asylum seekers, overstayers and illegal immigrants possess (forged) passports and IDs which they use to remain unlawfully (in the UK) and work here where others could.

"You are the source of a great deal of criminality for those in need of false IDs. The documents facilitate fraud at banks and entitle benefits and clothe the criminal in a false identity which cannot be detected. You have no control of this.

"This could include international crime and terrorism."

Cordoso was sentenced at Blackfriars Crown Court on Wednesday 15 December after pleading guilty to four counts of possessing false identification documents, one count of possessing apparatus for making false documents and one of possessing a controlled substance.

A further charge of possession of articles to commit fraud will lie on file.

He will be deported to Brazil following his sentence.