Former Guardian journalist Victor Keegan has published a new iPhone app which uses geolocation to highlight the locations around London which have associations with the Bard. 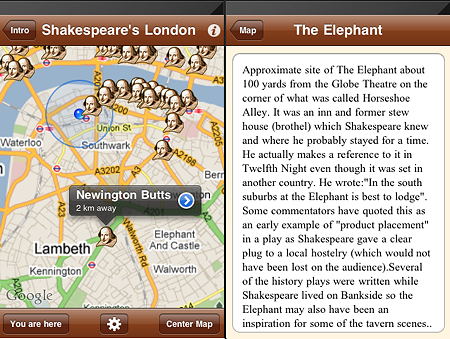 As you might imagine many of the markers are in SE1. This well-researched app looks beyond the obvious sites such as the Globe and Rose playhouses to include locations such as Paris Garden to the west of Blackfriars Road and the theatre where Shakespeare's men performed at Newington Butts.

Southwark Cathedral gets a good write-up for its associations with Shakespeare and his brother, as well as other literary figures such as John Gower and John Fletcher. The Falcon Inn in Hopton Street is also highlighted.

The app includes a link to an audio interview with archaeologist Julian Bowsher, co-author of the award-winning book The Rose and The Globe: Playhouses of Shakespeare's Bankside who describes what Bankside was like in 1600. It's a shame that the audio isn't better integrated with the rest of the app.

Victor Keegan, best known for his long-running technology column in The Guardian, now specialises in creative uses of new technology in partnership with developer Keith Moon of Data Ninjitsu.

Their previous apps include City Poems, linking classic poems about London to the streets and buildings that inspired them, and Geo Poems which contains all three of Victor Keegan's books of poems geo-tagged to the places that triggered them. Android versions are planned.

• Shakespeare's London is priced at Ł1.79 on the iTunes App Store.