Driscoll House could reopen as a hostel

Driscoll House, arguably the most imposing and interesting building on New Kent Road, could reopen as a hostel if plans are approved by councillors next week. 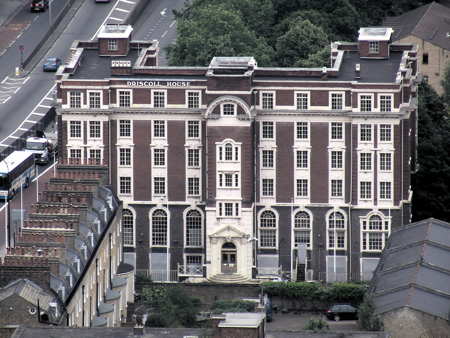 Driscoll House seen from the top of Strata SE1

Driscoll House, a grade II listed building, was built in 1913 as the Ada Lewis home for women.

Until 2007 it was owned and operated by Terence Driscoll as the Driscoll House Hotel, an eccentrically-run hostel for foreign students.

Ujima Homes had planned to demolish the building, but it was listed in 2006 and the building has been unoccupied since Mr Driscoll's death.

Now Hub City Ltd has applied for listed building consent to make alterations to the building's interior to enable it to reopen as a hostel.

The listed building consent application will be determined by Walworth Community Council on Tuesday 15 March.