A cyclist was killed in a collision with a skip lorry at the junction of Tanner Street, Tooley Street and Jamaica Road on Tuesday lunchtime. 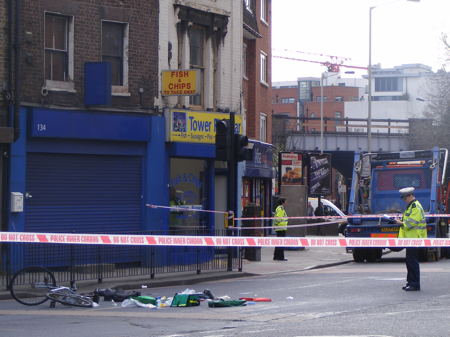 Traffic police officers examine the scene of the collision

A Metropolitan Police spokeswoman said that officers were called to the scene, close to Dockhead, just after 1.20pm.

The male cyclist, believed to be aged 20, was pronounced dead at the scene. He has not yet been formally identified.

Scotland Yard has confirmed that a man in his 40s was arrested on suspicious of causing death by careless driving. He remains in custody at a south London police station.

Traffic was diverted via Abbey Street. Buses on route 47, 188 and 381 were diverted via Southwark Park Road and Grange Road.