The crowded 78 bus route which runs through Bermondsey and crosses Tower Bridge en route from Nunhead to Shoreditch will finally be converted to double-deck operation over the next two months. 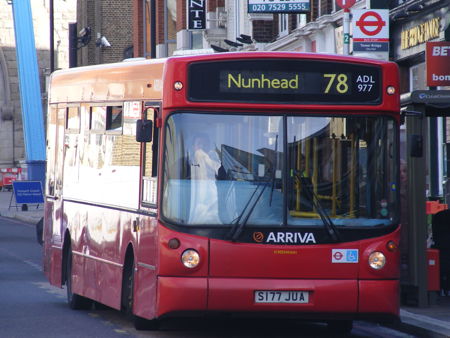 Last autumn we reported on confirmation from Mayor of London Boris Johnson that single-deck buses on the route would be replaced by double-deckers.

The buses will be Alexander Dennis Trident Enviro400s currently operating on route 38.

The first double-deckers will transfer to the 78 route from Saturday 2 April and all 15 single-decker buses required for the 78 will be eliminated by the end of May.

"Those of us who try and get on the 78 at rush hour know what a nightmare it can be, and bringing in double deckers is a big win for local residents," says Cllr Mark Gettleson, Liberal Democrat councillor for Grange ward.

"I'd particularly like to pay tribute to my predecessor, former councillor Bob Skelly, who constantly campaigned to get this sorted – and always reminded residents and TfL that he could remember when this was a double decker route last time around!

"With this victory in the bag, we now have to get Boris to see sense on putting a pelican crossing at the hugely dangerous junction of Tower Bridge Road and Abbey Street."

A test run of a double deck bus on the 78 route was held in July 2010; Transport for London recently published the formal record of that test [PDF] in response to a Freedom of Information Act request.