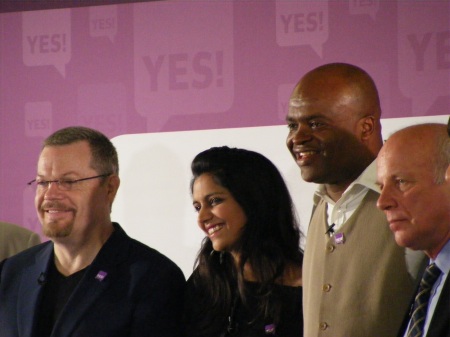 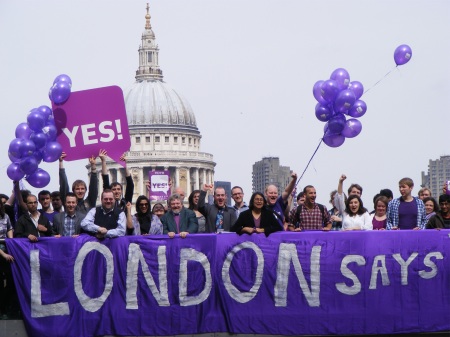 Yes supporters on the Millennium Bridge

"I am delighted to be hosting the launch of the Yes to Fairer Votes campaign," said the entertainer. "This is the only time we have been asked to change the way we do politics in this country and I think we should seize the moment.

A referendum on changing the voting system from first past the post to the alternative vote will take place on Thursday 5 May.

"I don't want to wake up after the referendum and find out it’s just business as usual at Westminster," declared Eddie Izzard.

Gold medal winner Kriss Akabusi told the mainly young audience: "I'm looking forward to supporting the Yes to Fairer Votes campaign. My hope is this will lead to politicians working harder at a local level."

Speakers were introduced by Katie Ghose, Chair of the YES to Fairer Votes campaign, who said: "We believe we have the momentum going into the short campaign. Today there will be more than 50 banner drops and more than 100 events across the country.

"This is a people’s campaign urging the people of this country to grasp the first opportunity we have ever had to change the way that politics is done in this country.

"This is too good an opportunity to miss. This is a straight choice between changing our politics for the better or settling for more of the same.

"The no side’s campaign of misinformation shows that they cannot defend the current system.

Speaking under the slogan ‘Make it 50’, Katie Ghose added: "We need MPs to need to aim to get at least 50 per cent of the vote if they are to be elected. We need to make it 50."

Later supporters unfurled a banner on the south end of the Millennium Bridge.

The Yes to Fairer Votes campaign is based in Chancel Street and Labour Yes in Park Street. The No to AV campaign has offices on Albert Embankment.

The referendum's London declaration will be at City Hall late on Friday 6 May.