Paul Ashton is staging his first one man show at Nolia's Gallery in Great Suffolk Street. 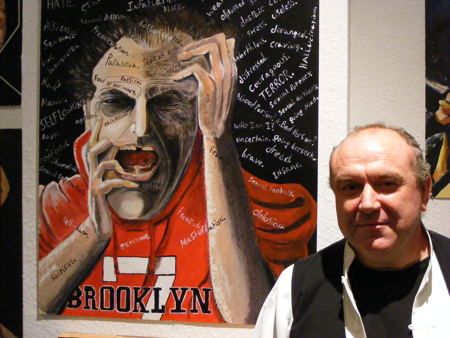 The artist has enjoyed drawing from childhood but this vibrant exhibition is a huge leap for Paul who spent twenty years as a homeless person living either on the streets or in prison.

Only in the last decade did he sit and pass his art A level examination.

In 2005 he won a Koestler Award for his painting, Inside, showing Tony Blair outside Number Ten dressed in an orange hooded top.

Two years later, and at very short notice, he had Prince Charles looking over his shoulder as he drew a moth's eye at Roots & Shoots in Lambeth.

Now having moved from a hostel to his own flat in Lambeth, Paul is both teaching art and grabbing any natural light hours to continue to own painting. Several works in the show were finished in the last few weeks.

He uses acrylic paints for his work which only occasionally feature landscapes. Most pictures are of people and some, though not maybe an obvious self-portrait, are of his own likeness.

He admires Francis Bacon and Lucien Freud but relates most to Vincent Van Gogh.

Paul Ashton of course hopes to sell some pictures and turn his solo show into a springboard. But most of all he says that he looks forward to people enjoying his exhibition.

"I want people to see it and be moved even if it's in a negative way. It will be a reaction."

• Paul's exhibition is at Nolia's Gallery until Wednesday; 1pm-6pm