Dozens of residents were evacuated from the 21-storey Lupin Point in Abbey Street after fire broke out in a flat on the 17th floor on Tuesday afternoon. 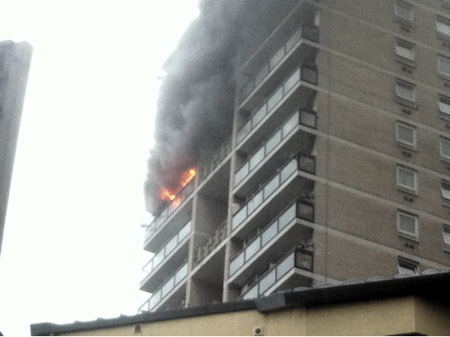 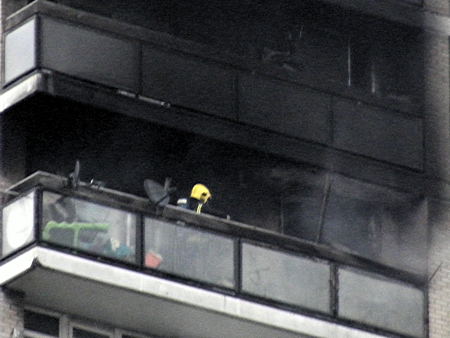 The London Fire Brigade was called at 1.59pm, soon after an electrical storm broke out above Bermondsey.

The fire brigade control room received almost 90 calls about the blaze from members of the public.

Fire crews from Old Kent Road, Bow, Kingsland, Southwark, Dockhead, Whitechapel, Silvertown, Lambeth and Dowgate were sent to the scene, as well as many support staff and vehicles.

"Our crews did really well to quickly gain entry into the flat where the fire started and to stop it from spreading to any of the other flats in the building," said station manager Richard Welch.

Residents were able to take shelter in the nearby Beormund Community Centre while firefighters tackled the blaze. A rest centre was set up by the British Red Cross.

The London Ambulance Service says that its staff treated one woman for minor smoke inhalation.

According to Southwark Council leader Peter John there are "no reports of serious injury".

A fire brigade spokesperson said that the cause of the fire is under investigation but early indications suggest that, despite eyewitness reports, it was not caused by a lightning strike.

The fire coincided with an electrical storm above Bermondsey and witnesses claim that they saw lightning hit the Lupin Point tower.

Lupin Point is owned by Southwark Council and managed by the Two Towers Tenant Management Organisation.

Within 40 minutes of the fire breaking out housing officers were taking a register of Lupin Point residents.

The northern end of Abbey Street was closed to traffic and buses on route C10 were diverted.