Lecturers at London South Bank University staged a protest in London Road on Thursday afternoon to urge the board of governors to return to collective bargaining arrangements. 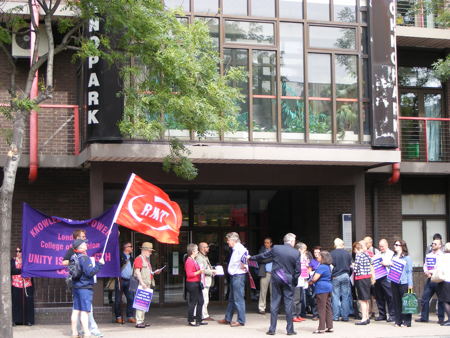 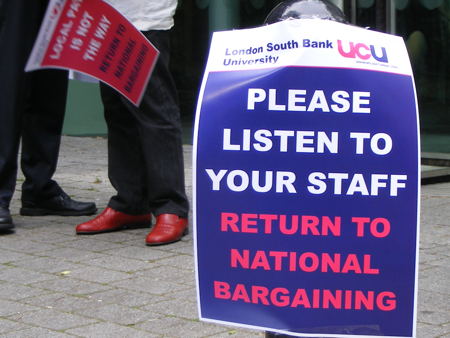 The protest outside the Technopark in London Road comes just two weeks after members of the UCU union took strike action in defence of national pay bargaining and is part of a bitter two-year dispute, which started when the university first opted out of national pay deals.

The union claims that LSBU is the first university to pull out of national
bargaining structures and, as a consequence, pay for staff at LSBU now lags behind other universities.

UCU's general secretary Sally Hunt has warned the university that it risks being seen as a 'pariah institution' if it does not rejoin the national structures and cautioned that industrial relations at the institution could deteriorate.

Union members rejected a management offer to match the national pay award for the coming year while remaining outside national pay bargaining structures.

"Staying out of national pay bargaining for a third year would be a big mistake for the university and lead to a significant worsening of industrial relations," says UCU regional official Greg Barnett.

"UCU members will be making it clear to the board that it is now time to rejoin the vast majority of universities back in the national arena."

LSBU's vice-chancellor, Professor Martin Earwicker, said on Thursday: "'The university is engaged in an ongoing dialogue with the union and is working towards a satisfactory resolution."