Russell Scott-Skinner, described as the new surrealist painter, is having his first solo London show at [email protected] 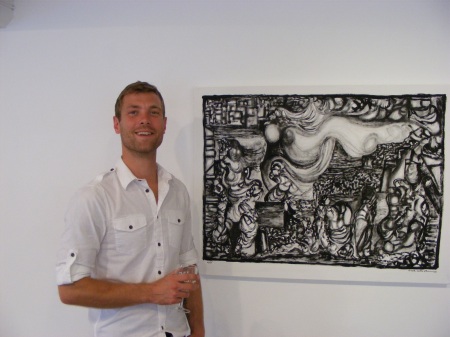 Distracting the Colour is a striking exhibition of black and white images displayed on white walls.

The artist is a descendant of the Scottish violinist and composer James Scott-Skinner who once taught dancing to Queen Victoria's entire Balmoral household.

Russell first worked as a photographer which he says was "a means to an end" but early last year he found himself to be in his stride as an artist.

He had lived in twelve houses before he was aged 18 but is now settled in the Darenth Valley in Kent. He claims no affinity with its famous artist Samuel Palmer who made the area his own.

Instead Russell admires Francis Bacon and claims to have an approach similar to that of Henry Moore by working without any pre set idea.

"Just clear the mind and start work," said Russell at the show's opening on Thursday evening. Only once the image has evolved does Russell think about a caption.

Many of the prints and paintings on show are recent work with often a substantial text as part of the work.

During the exhibition Russell Scott-Skinner is planning to be painting not in Kent but in the main window at [email protected].

Throughout the exhibition there is an opportunity to bid for one of his paintings via a silent auction. All proceeds from the winning bid will go directly to the charity Beatbullying.

"Schools are such a vicious environment," says Russell who points to friends of his age who are still affected by bullying in the past. He praises Beatbullying for helping schools reduce incidents by as much as 80 per cent.