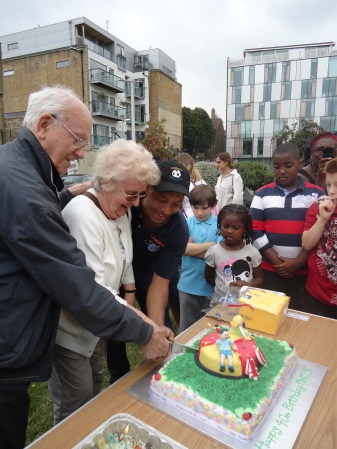 Afterwards Bankside Open Spaces director Helen Firminger said that all three had been instrumental in bringing about the resource enjoyed today.

Mint Street Park was once occupied by the original Evelina Children's Hospital and in 1970 local resident Moira Scully began a campaign to get the redundant tram tracks behind the former hospital lifted and a 'rough and tumble' playground built on the site.

At the time she was supported by St George the Martyr curate Ellis Blackmore and other parents.

Ted Bowman, another nearby resident, was part of the campaign to get a dedicated place for young people and set up the current adventure playground with its building and staff base.

Helen Firminger said that Jason Brown knew all today's children by name and was dedicated to making Mint Street even better.

Among those contributing to the celebration were Southwark Council, BOST, Mini Mints, Lant and Bittern TRA, Blackfriars Settlement, the Community Police and the Queensborough Centre.