The Golden Hinde could join in the Queen's Diamond Jubilee River Pageant next year. 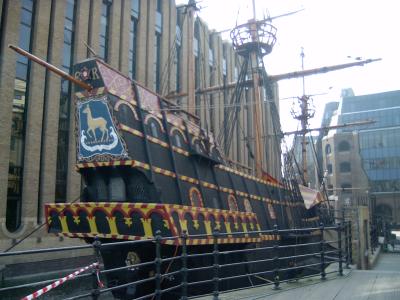 The possibility was raised by general manager Troy Richards during a reception on board this week.

The first Golden Hinde was launched in 1577 and captained by Francis Drake who was knighted on board by Elizabeth I at Deptford.

The Golden Hinde Trust is seeking support and sponsorship to raise Ł250,000 needed before the wooden vessel can take to the tidal waters again. On Friday Mr Richards announced that a case for support was also being made to the Heritage Lottery Fund.

The rigging needs renewing and the decks would have to be painted and varished.

The plan is to sail the galleon into the Pool of London on a spring tide when it would be possible to pass under London Bridge.

The Golden Hinde is too large to take part in the entire pageant which begins at Hampton Court but she might be included in a welcome for Her Majesty at Tower Bridge.

The warship left St Mary Overy Dock in 2003 to make an appearance at the Southampton Boat Show but the voyage was made on a barge.

Last year about 49,000 people visited the ship. In future the trustees hope to highlight the life of Sir Francis Drake by working with the National Trust, who have care of Drake's home Buckland Abbey, and the National Maritime Museum.

A new entrance from the dockside is to be installed before the Jubilee and an ambitious scheme for a new visitor centre is also being considered.