Residents of Hopton's Almshouses in Bankside have renewed their call for their landlord, the Anchor Trust, to transfer the historic homes for older local people to a Southwark charity rather than a West London body as planned. 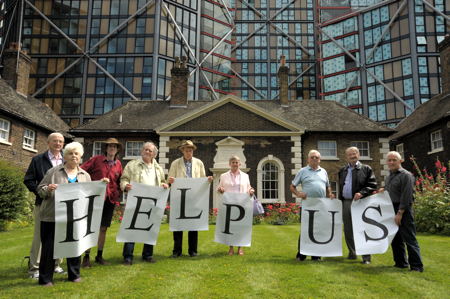 Last month we reported on the Anchor Trust's plans to transfer 11 almshouses – including Hopton's – to the Pathways housing association.

During the consultation process 19 out of 24 tenants of Hopton's have indicated that they would prefer a transfer to the Southwark-based United St Saviour's Charity which has offered to take on the almshouses.

"If we were council tenants we would get a vote on the transfer," said 88-year-old Henry Holsgrove.

"If we were housing association tenants the regulator could stop the transfer. But because we live in an almshouse, Anchor can ignore the results of its own consultation and, we feel, sell the roofs over our heads.

His wife, Alison Holsgrove, added: "Now I have reached this time of my life I thought it would be sunshine and roses. Now it is all full of fear and trepidation."

Philip Sturrock, chairman of the United St Saviour's Charity, has indicated that the historic Southwark charity is prepared to become trustee of all 11 almshouse trusts to help Anchor Trust bring the matter to a swift conclusion.

"St Saviour's would use its net assets of nearly Ł30 million to deliver a swift and surefooted transfer for Anchor and then transfer the almshouses on to more local charities," he said.

"We are happy to work in partnership with Pathways, Harrison Housing and other local charities."

A spokeswoman for the Anchor Trust told the London SE1 website: "The trustees have not yet reached a final decision on the future of Hopton's Almshouses. As and when they do they will need to take into account a number of factors. These will include the best interests of the residents as well as their obligations under the terms of the trust."

Last month Southwark Council's deputy leader, Cllr Ian Wingfield, pledged to use the authority's influence and power to help the residents of Hopton's.

Hopton's resident Leslie Gay added: "At present almshouse residents have no legal rights, so Anchor can ignore us all. So we wrote to Lord Shipley in the House of Lords. He kindly put down an amendment to the Localism Bill to give the regulator power to stop older people ever being treated like this again."

His neighbour Shamus Dark said: "It's a bit like David and Goliath. We are a small group of elderly residents. Anchor Trust is the largest housing association in the country with 10,000 staff.

"But in the Bible, David won."