The God of Soho at Shakespeare’s Globe

Does this provocative production represent a step too far for Shakespeare's Globe, asks Alice Dickerson. 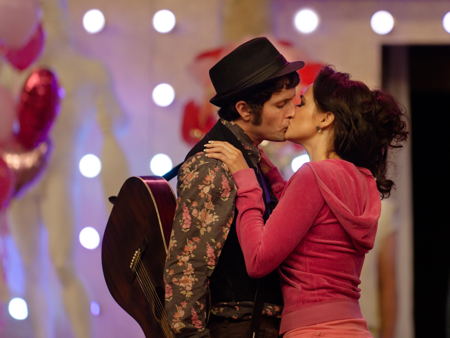 Contemporary productions can succeed at the Globe. Last year's production of Anne Boleyn was particularly successful and it is pleasing to see it return this year.

But if a play is truly to deserve and inhabit the magnificent Globe stage there needs to be some link with the great playwright, be it either the setting, language or staging. Yet The God of Soho is unashamed in its crude and exaggerated take on modern day life and culture. The tokenistic, throw-away reference to 'will.i.am Shakespeare' (which is likely lost on half of the audience) does not get close to addressing this.

The music and dancing is excellent – one of the few trademarks of Globe productions that has not been abandoned. The pseudo rock band which welcomes the audience as they enter the theatre, accompanied by megaphone rapping, represents a recognisable update on the traditional players of Shakespeare's time.

It is the script and characterisation that lets the production down. It is full of clichés and predictable jokes about rock stars, drag queens and vacuous celebrities. The Gods are as bling-tastic and shallow as the mere mortals they encounter, thus rendering redundant any attempt to contrast Heaven with a two-dimensional, debauched and seedy Soho. Even the title is a puzzle, as the action is focused on the Goddess, not the God, of Soho.

One of the highlights of the evening came not from the stage but from those watching, when the gasp of one particularly sensitive member of the audience – in reaction to the unexpected use of full-frontal nudity – reverberated for all to hear.

The God of Soho is billed as a satire but Chris Hannan – its playwright – has denied that it is one. It certainly pokes fun at and ridicules the world inhabited by The Only Way is Essex types. But the play attempts to go beyond satire, ending on a moral note. It is weaker for it as, by the end of the second half, you couldn't care less what happens to the characters and their morals.

Undoubtedly any play performed at the Globe has a lot to live up to. The benchmark has been set high. The God of Soho unfortunately fails to reach it.