Street Scene at the Young Vic 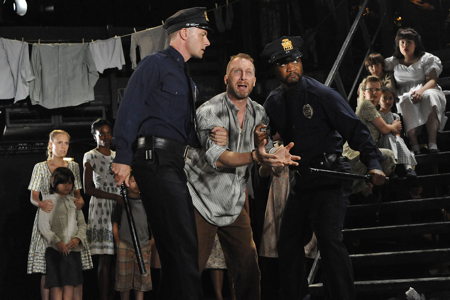 Settings don't come much more laden with theatrical potential than this: 24 hours in a 1940s New York tenement building. Already certain images spring to mind and one begins to imagine the mixing of immigrant cultures, the comings and goings of the working-class inhabitants and the inevitable gossip, politics, love and intrigue.

Street Scene has it all. However, this is no predictable, formulaic drama. Instead, it represents a relatively rare breed: a genre classed as 'Broadway Opera' by its creator, the early twentieth century composer Kurt Weill (of Mack the Knife fame). Just as different nationalities rubbed up against one another in the great melting pot of nascent America, here opera jostles for attention with musical theatre. And it works spectacularly well.

Realising this ambition does not come easy. In addition to the twenty plus cast members, the Lewisham Choral Society provides extra singing power whilst the BBC Concert Orchestra realises the dramatic score. This makes for an incredibly powerful sound, especially in the relative confines of the Young Vic's main stage. Space is at a premium and the members of the BBC Concert Orchestra looked as cramped and on top of one another as the tenement inhabitants themselves. It took a while to locate the members of the Lewisham Choral Society, sat in the gods, but they made sure their presence was felt in the second half when their singing, combined with that of the cast, reverberated around the theatre.

Elena Ferrari as Anna Maurrant managed to achieve what is often so difficult; playing an operatic leading lady who the audience believe in and care about. Oscar O'Rahilly as the young Willie Maurrant also deserves particular mention, imbuing what could have been a one-dimensional character with conviction and depth. Children from primary schools local to the area provided endearing moments of light relief and managed to pull off convincing American accents. The tenement setting was perfectly realised, as the eponymous fire escapes and stoops of New York were recreated with simplistic and striking theatrical staging. The only difficulty came when trying to believe that the action was taking place in the midst of a sweltering Manhattan heat wave, given the onset of brisk autumnal weather outside.

The love story at the heart of the plot, between Rose and Sam, risked at times becoming a little schmaltzy. It was the spectacle of Mae and Dick dancing, alternatively passionately and comically, that was the highlight of the first half of the production. However, the action came alive in the second half, with a plot develop met which – whilst inevitable – still saddened and shocked.