In terms of the series title 'Regime Change' Richard III marks the end of the bloody Plantagenets and ends with the union of Elizabeth of Lancaster with the Earl of Richmond, the beginnings of the Tudors. 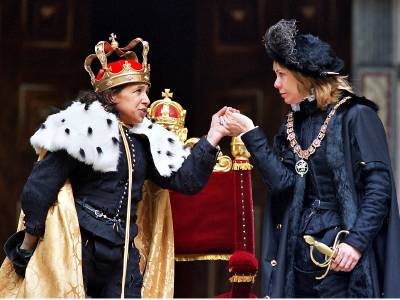 Richard, Duke of Gloucester was born a hunchback and has been despised and reviled all his life. Even his mother refers to him as a foul toad. Kathryn Hunter's excellent crabbed and distorted figure with withered arm is devious, amusing, self aware. S/he confidentially addresses the audience to comment on the action. In this notable all-woman production the wo-men are strong and noble, while the ladies seem not to be very feminine after all.

Amanda Harris as the loyal Duke of Buckingham commands the stage and the audience, before falling foul of Richard's desparate ambition and being refused the promised honours. Richard brutally murders his way through the line of succession to take the crown himself, feigning reluctance but glorying in the power. He even courts the widows, partly with success, but he eventually comes to realise that

The plot unfolds rapidly, ranging over a wide geographical area, with London references to Whitefriars, Barnards Tower, and of course the dreaded Tower, where the young princes are imprisoned. Holborn is mentioned for its strawberries- the juicy berries symbolising perhaps the blood spilt in Richard's quest. The final death scene on Bosworth Field reminds us that this history is played out against the Wars of the Roses.