Bermondsey Community Council has agreed to allow Caphe House in Bermondsey Street to continue placing chairs and tables across the road in Tanner Street Park. 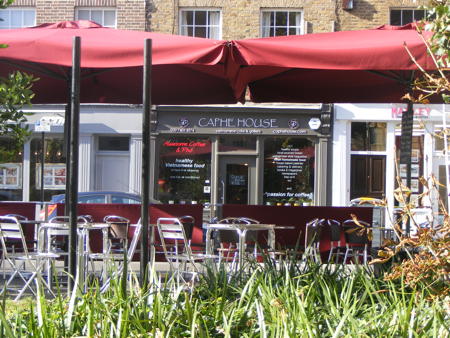 Vietnamese cafe Caphe House signed a five-year licence agreement with Southwark Council's public realm department in May this year to allow it to set up an outdoor seating area in Tanner Street Park during the summer months. The cafe paid the council Ł860 for this year and is due to pay Ł1,300 in each subsequent year.

The seating area has been used this summer even though no planning permission had been obtained.

The cafe's planning application for the outdoor seating area was considered by Bermondsey Community Council on Thursday evening.

"I have serious concerns about this," said community council chair Cllr Linda Manchester who recalled an application for outdoor seating for a pub which had been refused.

The planning officer replied that the situation was not comparable.

At present the cafe serves customers at seven tables each with four chairs across the road in the park opposite.

"Because they are already there we have limited control," said Cllr Mark Gettleson when commenting on the quality of the seating.

"I don't think it's in keeping from a design point of view. It's a conservation area. I think it could have been a lot better."

During questioning it was claimed by the applicant that Bermondsey Street was only busy in the mornings and evenings when people went to and from work. Customers did not carry food across to the park. Orders are taken in the cafe and delivered by staff to the outside table.

Four objections had been received about possible blocking of the park entrance, the commercial use of open space and noise.

After 35 minutes deliberation it was agreed to grant planning permission for a period of one year (compared to the five years sought in the application) to allow for the situation to be reviewed.

Permission was given for the outdoor tables to be used on weekdays between 8am and 5pm. Cllr Graham Neale successfully moved that Sunday hours should be restricted to 10am to 4pm.